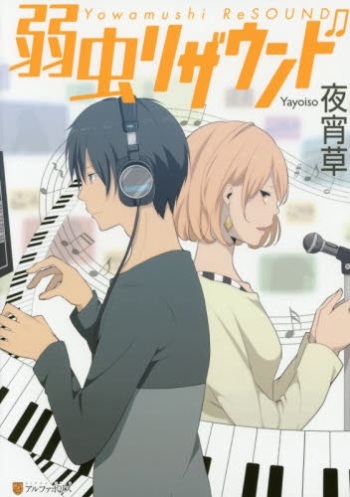 Legendary band REXX was only popular when releasing their debut single. They never revealed their faces. A taciturn boy who found a CD of REXX's that was never publicized, and a group of band who named themselves REXX tries to revive the band!

VANCA is a band created by vocal Takuya and unusually tall guitarist Ooshikouchi. Anyone who comes near the band becomes involved in their affairs! VANCA knows no limits, and continues to grow, taking the world by storm.

Musical instruments have minds and bodies, feelings and thoughts. When tossed aside and abandoned, they can become corrupted, even murderous. Petrushka is an instrument unlike the others; she can't make music at all. After she's found by the mysterious Rentarou in a trash heap, they must team up to calm a despairing lute and perhaps reveal the secret to Petrushka's lack of musical ability. Can Rentarou somehow unlock her latent talents?

Sakurai Seri wants to be an idol, but he's so nervous that he seems to only meet with failure. Then, one day, he and two other boys are chosen to debut as members of a new idol group, "Otoko no Ko." The other two boys are the cool, serious "Ren" and the enthusiastic, cute "Tama." The only catch is that they plan to be a male idol group that dresses as girls. This may be Seri's big chance, but he never imagined himself as a female idol!

Taki Kanon and Nakamori Ryou met through a piano in their first year of high school. Nakamori played video game songs beautifully, while Taki's talent lay in piano tuning. They were in the same class, and they spent a lot of time together at a piano. But shyness and misunderstanding plagued the formation of a more serious relationship. Over the years, will they be able to find a way to make the paths of their lives finally converge?