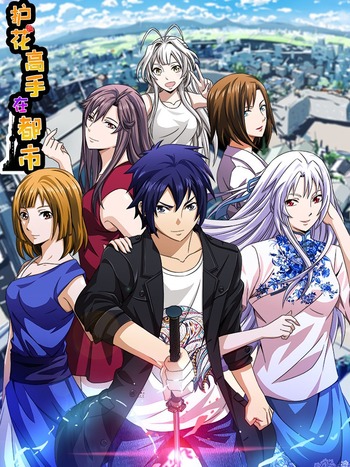 The Superb Security Guard in the City

Security guard Chen Yang, paired with his superb fighting skills and extraordinary wisdom, thrives in the bustling city like a duck takes to water. He fights with his fists when the opponent is strong and with his wits when the opponent is cunning. But… as the love of a beautiful and mature divorcee, an ice-cold female CEO with incomparable wisdom, and an attractive and valiant young female cop come attacking, how will Chen Yang be able to endure! How can he overcome such worldly affairs?

Tai Paer, who's profession, a necromancer, is considered to be one that make it difficult to live a normal life. As he was going to be burned alive by the townsfolk, he's miraculously saved by the system, which is searching for people that fit the job requirement of a Village Chief. Tai Paer starts his new life as the village chief of the novice village and progresses towards building his own harem.

By a twist of fate, Liu Lang, once the richest young master in Nanshan City, becomes a office worker both in human and immortal worlds. He takes charge of the immortal imprison stationed in the human world. No pay? But he learns divine techniques from immortals! No social insurance? But fairy comes and gives him elixir! No year-end bonus? He gets 13th month pay from his fiancée's company! Lo and behold, how Liu Lang gets everything in his hands and becomes the legend of the two worlds!

When I asked my master why he wants me to study medicine, he said "Because you can't find a wife normally these days, if you have these skills, you can get touch girls."You mean a pervert, right? But I too am a pervert, as I usually peek at my Senior sister while she takes bath. But I am also a Gentlemen who treats girls with care, that's why they call me A Gentleman Pervert. In this way, I've learned superb medical skills and came to the city to find a wife... or possibly a harem?

The first thing that Jiang Feng saw when he opened his eyes, is that his hands are on his class teacher's Breast!! Owwu~ This, this is the time before I cultivate! The Immortal emperor has once again return to the mortal world!

The Genius System Without Equal

Xiao Luo is an ordinary young man, who unexpectedly gained a powerful system. You need decades of hard work to gain skills and knowledge. I only need to redeem points to get them at my fingertips. Let's look at Xiao Luo with his peerless genius system.

A human being from another world, crossed over as a hero... into the bed of the female demon villain?! If I hadn’t established marriage contracts with all the villains in the game before crossing over into its word, I’d be a dead man. Now the villains are pestering me, making me assist them in dominating the world, contending for my hand in marriage, what should I do?! Stuck in the game... emergency!!!