Your Majesty, Please Spare Me This Time - Reviews 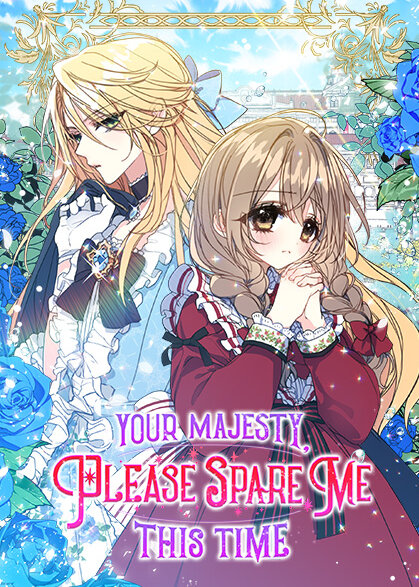 Brutally murdered by a psychopath emperor?  Good thing you know that in the past, he was forced to crossdress as a princess and nobody knew he'd grow up to be emperor, and hey!  Now that you've conveninently time-traveled, let's suck up to him *cough* 'her' in hopes that you'll manage to protect your neck and those of your family members!

Ignoring that all the '12 year olds' look five, most of their parents look 16 and the art is borderline painful in many places, you'd think the plot would be interesting- and it kind of is.  Except all the characters are extremely annoying.  I feel like the author was struggling to try playing up the comedy aspect and failing because most of the characters' behaviours don't come across as funny, just cringey.

I really can't recommend it in any way, personally.  Really, it's biggest 'positive' is that is doesn't have anything so objectionable that I'm disgusted or hate it.  It's just so boring and awkward I see no point in reading it.

I love the fl's internal struggle with having hate for the future/past emperor, and with seeing him as a currently innocent person who can talk sweetly and who at this point in time hasnt done anything to be considered a monster in her mind, as he currently is. It's nice that she doesnt immediately forgive the guy as soon as she sees he has emotions and isnt just a cold blooded monster, but he was human and maybe something led to him killing her father, brother, and all those other people. Really nice dimesnsions to the characters.

If you want only romance this isn't for you ( so stop bashing it). The thing I like about this story is it has a plot, when I say plot I mean like an actual, really good plot. Ngl it was kinda hard for me to grasp stuff instantly (hence the 9) but once I did I was mind blown. This makes you question where your morals stand. I'm not telling it's okay what the ML did but it's understandable ( kind of like how we can defend but also understand eren).

- Each character are very interesting and not written solely for plot convenience; they have their own problems, redemption and development in the story.

- MC is strong in her own way, not a "girlboss" a lot are looking for, but a strong female lead who just wants to protect her family and needs healing :')

- Art depicts strong emotions such as fear and hate, which fits well with dark themes, especially depicting MC's hatred towards ML for what he has done.

- Slow-burn, a slow and steady development between the relationship of MC and ML; one despises the other, while one distrusts the other.

- Story and Art dive in deeper how characters really reflect to what they have gone through, and does not make it as "something they just went through" but more as "something they need to emotionally/mentally heal and recover from"

- The story focuses on and doesn't force the development between the characters whom MC tries to help/fix, rather than letting the whole story revolve around her.

*Spoilers for those who haven't read the manhwa*

I did find it annoying and stupid for Lariet to submit herself and serve Prince Rupert despite for what he had done to her in the past life. However, I can't blame her. There were no other options of what she can do but rely on her knowledge of future outcome that happened in her past. She can't runaway with the family she dearly loves, or else they will be marked as traitors and be killed anyway. What can a young girl do? She's aware and is pained by what she gone through because of Rupert. She hated him. But despite of that, she learned how to understand and sympathized with him.

For Rupert on the other hand, his background dosen't excuse the way he has hurt Lariet. I can't really blame him either. The author really did a good job making me sympathize someone like this guy. The poor guy is going through an ongoing torment in the palace, that we've never even realized until chapter 57. His mother is being abused and controlled by the emperor, she couldn't do much but teach him how to survive. The king only ever uses Rupert to vent anger and use his alchemy on disgusting inexplicable things. Even Lariet realizes that he never had anyone to help and raise him right; why do you think she gave him that sympathy?

This is what I love the manhwa, each character has their own suffering and reason and it makes them more human. The story depicts how characters end up the way they are, either bad or good. Lari knew she was raised better and loved her family for that, but what about Rupert? Lariet always knew she hated him but couldn't help but have the urge to be there for him, because she had what he didn't. Love. As mentioned by Lari in chapter 68, Rupert had all the support and people he needed to help him become emperor, but they wouldn't know how to teach Rupert how to grow as a person. Lari was there to fill in that gap, and I ADORE slow-burn.

The story is decent and I quite like the moments when she remains hateful towards the ml, but the fl isn't the smartest imo. spoilers ahead////

It took the fl over 60 chapters to realise that her friend had a crush on her brother, and she doesn't make the best decisions either, going to unlock the vault at her aunt's even though she knew her aunt was provoking her into doing it, and then just screaming for the prince to come and save her. Addditionally Tori's character is extremely confusing, there's no gradual change into her warped personaility, it just suddenyl appears and then disappears with no explaination.

My biggest problem is that the entire plotline of the story is to find out why her family was supposedly fasely accused, and yet over 70 chapters later she's still complaining about not knowing anything, and she still can't figure it out. I find the progression a bit too slow.

Overall I don't find the plotline enticing, and the characters are a bit average too. A good read if you don't mind slow development, hopefully there's more in the future chapters.