Your Lie in April - Reviews 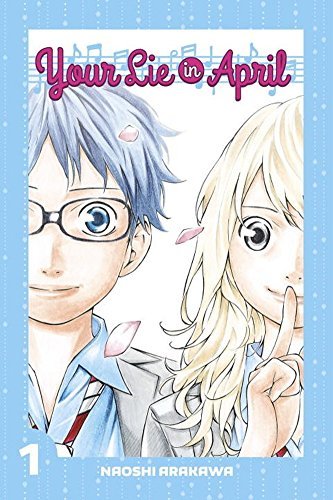 Kousei can't do it. He can no longer listen and feel piano like he used to. Mentally scarred from being the shadow of his mom, he can't perform because of his trauma and stage fright. One day he meets Kaori, a young and energetic girl who tries to bring colors in his monochrome life. Too bad that she is his friend's girlfriend. That's why he gets called Friend A.

As I said multiple times, this manga has many flaws. I think the biggest issue is the target: it tries too hard to reach both girls and boys, mixing where it shouldn't have. Characters whine and cry too often: I understand they're kids, but there's a limit ffs. There are flaws, ok. Did I have fun reading it though? Yes. The read was enjoyable and time passed so fast it only took me 2 days to finish it.

This is my opinion on a manga that gave me a good time but it could've been much more and it's negative in almost every department. I suggest you to read Your Lie in April because, as a tearjerker bait, the mass should like it. Have fun and don't hate me for this review, it's just my opinion.

A story about a piano prodigy, who due to childhood trauma can´t play music since he can´t hear himself play, but then he meets a girl who changes everything he thought he knew in his life.
This is not a complicated story, everything is pretty much telegramed to the reader right away, even the piano lore is explained in really plain terms so that anyonecan understand, but what makes this story strike so hard is how the author unravelled the emotions, the personal discoveries of the quartet.  The storytelling could almos be called cheesy but nonetheless it makes you stop to aprecciate it and enjoy the warmth of those beautiful characters.

The art even thought is really good in the more dynamic parts, it gets a bit strange in those face close-ups. aside from that it´s preety much slightly better than average.

This a really great short story to makeyour cold heart melt away.

I read this years ago and I loved it. I love the manga and it made me cry however I can't bring myself to watch the anime. I've been at episode one for so long, I just can't watch it :/ the manga was so good that I can't watch the anime. The manga just got me so emotional that it got me thinking about it for so long. Your Lie in April was one of those mangas that leave an impression on you. If you watched the anime, read this. If you're looking to read a new manga, read this.