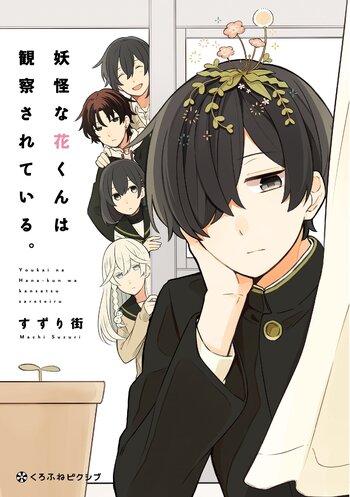 If you're looking for manga similar to Youkai na Hana-kun wa Kansatsu Sareteiru, you might like these titles.

A highschool detective special interest group meets up with all sorts of murders and mysteries, including supernaturals. Included is a dog with an attitude.

Goraihou Academy — A world leading bourgeois school where mysterious creatures gather. In order to protect the academy, the members of the student council with attractive appearances and fickle personalities stand up to...?! Together with Tadato, the president of the student council whose father also happens to be chairman of the board of directors for the school, and Naoki, who is always hitting on an uninterested Shinya, Shinya discovers the haunted secrets of Goraihou Gakuen. Things begin to change when a dark creature is discovered hiding within the school. The trio go to investigate and find Gen-san. And from there on they solve mysteries and hauntings and other paranormal events within the school.

Umiha Hiyoko is just transferring into her new school. Unlike most ordinary girls, Hiyoko beholds a special power. She can understand feelings of things that most humans cannot (such as flowers, trees, birds, etc.). Although Hiyoko doesn't know it at first, she is a princess of this place called the Broom Kingdom! Just what in the world is going on?

My name is Akari Mochizuki. After I got hit by a ball, I received a special power. Now I know how a boy who kisses me feels!

Amatsuki Renge, 13 years old, is from a race of demon foxes who transform into humans to blend into modern society. All foxes are trained in transformation magic, but Renge just cannot seem to get the hang of it! Forbidden to leave their village, Renge nonetheless longs to visit the human world to meet her idol, the singer Miyabi.

Futaba Yoshino is a freshman girl taking regular courses at the academy, but she daydreams about Kouga Kiriya, an aloof second-year student with translucent, dusk-colored eyes, but he's on the advanced track of special studies. Although they live in different worlds, something unexpected suddenly brings them together.

Suzu to 3-tsugo no Boyfriend