Alt title: What to do With a Childish Love? 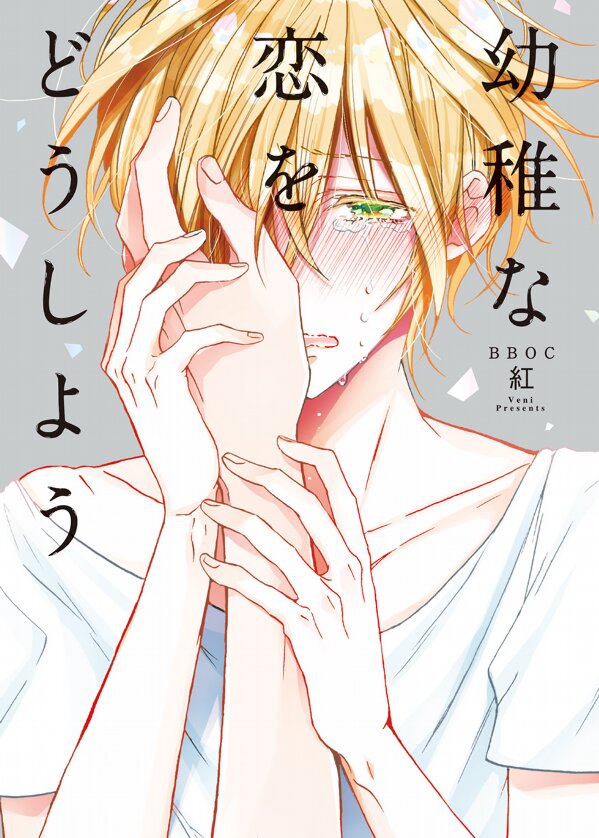 Haruto Sakurano is a lonely boy who has been surviving on his own since his mother abandoned him. Unable to defend himself from sexual assault and constantly discriminated against for being an omega, Haruto begins prostituting himself to save money to move out of town. Then one day he meets a transfer student named Takagi whose calm, non-judgemental nature slowly begins filling the void in his heart. Haruto's fear and self-loathing keep him from expressing the love he feels, but Takagi's gentle care and persistence bring them emotionally - and physically - closer together. Warmth and tenderness begin to replace Haruto's pain and loneliness, but how can Takagi convince him that he truly is worthy of being loved?

This was my very first omegaverse manga, and after reading a great many more it remains my favorite for a number of reasons. The characters are loveable, their relationship is actually consensual, the sex is hot, and the drama doesn't stretch on for too long. Basically, it avoids a few of the most common tropes that the ABO sub-genre is known for and presents a sweet story of two boys falling in love. It also writes the main characters like the adolescents they actually are. Both have been sexually active prior to meeting each other, but having sex doesn't make you an adult and it won't automatically solve all your problems for you. Relationships also require verbal communication, honesty and resolve; something these kids learn along the way. Sakurano is a deeply lost and lonely young boy who was abandoned by his parent and has nobody to protect him the way that he - as a minor child - has the right to be protected. With no one to defend him, he's often the victim of abuse, discrimination, and sexual assault. He's learned to perform sexual favors for adults so that they will give him money, which he hopes will eventually buy his way out of town and lead him to a place where people will STOP abusing him. But in spite of his plethora of negative sexual experience, he's still an immature youth who has no idea what to do when he develops a genuine romantic attachment to another person. He is stricken with terror at the idea that he will bring Takagi unhappiness. Takagi, meanwhile, is also crippled to an extent by his own insecurities. He's the more mature person in their pairing and the rock that Sakurano desperately needs in his life, but Takagi is a young man of action, not words. He can give Sakurano what he needs physically, but he tends to hold in what he thinks and feels, not understanding just how desperately Sakurano needs verbal reassurance to help dispel his fears. When Sakurano is assaulted yet again, Takagi steps up, takes action, and goes right back to Sakurano to give him the care that he needs... but without verbal reassurance, Sakurano's fear that he is "causing trouble" only grows worse. Sakurano's path to maturity is slow, but still present in small ways that shows he is genuinely trying to figure out the right path for him. His decision to stop prostituting himself when he realizes his feelings for Takagi are legit speaks volumes, and later when Takagi literally drags him home after almost making another stupid decision, both boys are hit with the understanding that each of them was wrong in their own way: Takagi was wrong to stay silent about Sakurano's self-destructive behavior, and Sakurano was wrong to run away from his life instead of facing his problems and his feelings. Takagi worries that he, as a beta, could be an inadequate partner for an omega, but Sakurano tells him that gender doesn't matter, all that matters is that they are each choosing each other and standing by that choice. This piece of wisdom feels like the ultimate sign of Sakurano's growth: the determination to live without letting his past or his fears dominate his present. Takagi is also determined to start verbalizing more and tells Sakurano flat out that he doesn't want him going to any other man ever again, and Sakurano agrees. In the end, life is about the choices you make, and these boys are finally on the path to making the right ones. In conclusion, I enjoyed this a lot and I think the story had a nice ending. If you are uncomfortable with some of the topics it addresses (mainly rape and child prostitution) you might want to steer clear; but for me, watching Sakurano break free from his cycle of exploitation and find someone to genuinely love him and help him heal was worth it.