You Got Me, Sempai! - Recommendations 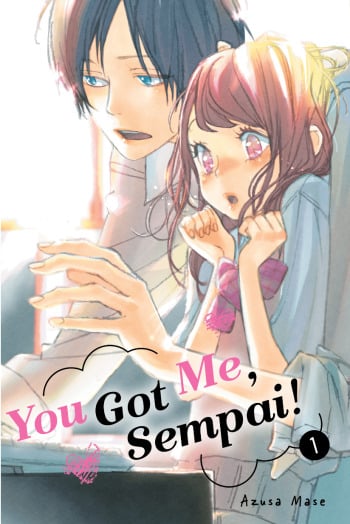 Both mangas are so wholesome. It shows a relationships between two people and how they deal with troubles that go their way. I just keeo on reading both mangas over and over again because it's so so so so good

A cute, inevitable, warm love story between a blond delinquent boy and a black-haired serious girl.

How do I even start with these mangas?!! They're just so cute and light to read!! Both stories focuses on the relationship between the MCs and it's just so cute to tag along. Their relationship is really wholesome and you're definitely in it for the fluff!

Hotaru is a 16-year-old high school first-year who has always been ambivalent about love, preferring instead to have a lively life with her family and friends. So when she sees her schoolmate, Hananoi-kun, sitting in the snow after a messy, public breakup, she thinks nothing of offering to share her umbrella. But when he asks her out in the middle of her classroom the next day, she can’t help but feel that her life is about to change in a big way…

i find both stories to be a bit similar because both focuses on the relationships of MCs almost all throughout the mangas. The only difference I can think of is that the MCs attitudes towards their relationship and how they handle it. Either way, both stories are very very very good and you'll definitely equally love both

From that day on, my world is filled with Senpai. Akari, who just entered the high school of her dreams wanted to fall in love! With that thought in mind, she was invited to a club by a flashy Minami senpai. One day, the Senpai who always seemed to hide his thoughts under the constant smile, breaks down into tears. She found out about Minami senpai's sad, hidden thoughts--??

Second-year student Anna works together on the Culture Festival's Executive Committee together with the school's famous Chiaki-senpai. However, everyday, she's forcibly swung about by a self-confident, flashy, lazy, and ultra-insincere Chiaki-senpai--!?

In middle school, Ayumu kept getting teased and pranked by Tsuki, even though he's a year below her. Now that she's in her second year of high school, she's ready to be the experienced senpai for the incoming freshman Tsuki.

Mizuki is in love with her senpai, Yamato, because he is the one that saved her from hunger when she was dieting by giving her a small piece of chocolate. Still, getting close to him is so hard when Ryou, his best friend, is around. How will Mizuki be able to confess to her beloved senpai?