You Better Not Run Before I Get My Way! Preyed on by My Scary Boss - Recommendations 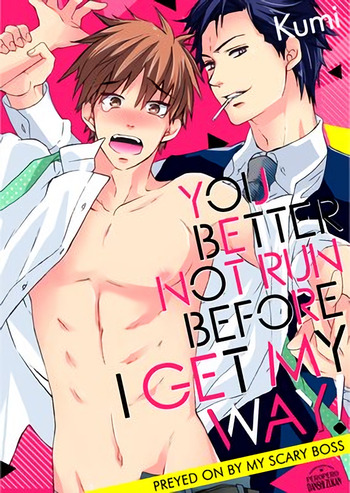 If you're looking for manga similar to You Better Not Run Before I Get My Way! Preyed on by My Scary Boss, you might like these titles.

For Men Only!? Couple-Busting Agency

A scandalous office romance about a cool young designer and a moderately annoying businessman! At this cosmetics company, the entire design division shares a common problem, and that problem is Takumi Tokura. A manager with a history in sales and a penchant for sports festivals and living the dream, Mr. Tokura unknowingly pushes impossible tasks on the design team while spewing idealisms at company parties... In reaction, Ryo Takizawa falls deeper and deeper into a quiet rage. That anger comes to a head after the party when Mr. Tokura announces a mandatory trip to a brothel for all the male employees. Ryo stubbornly tries to go home, but his superior tries to act like a life coach and yells that "sex is important!" This situation leads to a surprising twist! "If you're so insistent, please teach me." This superior and his subordinate mix together like oil and water, but neither can go back once they open the door to new pleasures...!

For 30 days, I'll make him mine…! This is a battle-filled love between a gay subordinate and his straight boss (who has already been trained).

I've always admired my boss, Akira Okita. He's always considerate towards his subordinates, but it seems he has something on his mind lately... "Please let me know if there's anything I can help you with!" I blurt out before I can think. I just want to do something for him, but I never thought that this outburst would lead to me taking on a job as his model! It turns out that Akira is actually a rather famous painter, and while the deadline of his exhibition is approaching quickly, his model had suddenly canceled. Not confident whether I'd be good enough, I head over to his art studio. There, a shocking discovery awaits me. All of Akira's works portray intimate moments between men. That night, Akira and I have an intimate moment of our own, his brush gently caressing my body...

Ian Evans is your run of the mill corporate playboy with a new pretty boy in his bed every night. His secretary, Sanada Manabu, manages nearly every aspect of his life including making sure those pretty boys don't over stay their welcomes. So what happens when Manabu shows up at his bosses favourite bar and offers to go home with him?

Manabe Shiro, who’s busy working as the manager of a travel agency, relieves the stress from his daily life by working at a cross-dressing club for just three hours on Saturday nights as “Mashiro”. One day, the high-spec, sarcastic subordinate who’s always looking down on him, Nabatame Kuro, visits the store by chance...!? His stress-relieving hobby of crossdressing was discovered! What will he have to do in order to keep his secret!?

Omae no Subete wo Ubau Made

Out of the blue, the new president, Taiga, suddenly ordered Amami Kei to become his secretary. Though confused, Kei reluctantly agree but upon meeting Taiga, Kei was shocked to see the person who was responsible for his trauma way back from high school! Kei immediately rejected Taiga’s proposal but Taiga couldn’t take the rejection well. And so starts the love pursuit relentlessly!