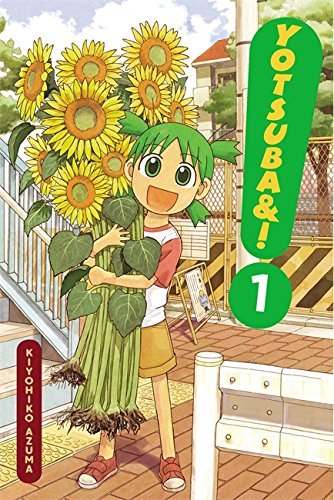 There are no words to describe the simple, sumptuous, innocent joy of Yotsuba.  Completely out of genre for my usual reading interests, I find myself drawn constantly to this adorable comic delight.  The characters are alive and real without being caught up in the kind of psycho-analytical development that comes with less episodic stories.  The art is incredibly engaging with a simple yet deliberate style.

Okay...that was a lot of words, and there could be more obviously.  But this manga deserves the highest possible recommendation for fans of any style, any genre, fans of any age or sex, even people who aren't fans at all.  This is the one manga I direct everyone to.

Yotsuba is the closest I can describe as a "perfect" manga.

Not in the sense that it will be the most enjoyable but rather it sets out to create what it feels like to take care of a young kid growing up and absolutely nails it. It's a beautifully illustrated, beautifully drawn, work of art that deserves as much recognition as possible. We follow Yotsuba and her Dad... and that's it. It's just a manga about the beauty of the innocence of childhood. It's incredibly sweet and refreshing like you're taking a bite out of a fresh piece of fruit.

That being said, I don't think this is a manga for everyone. It's very "slice of life" and if you're not into slice of life, then you might think that Yotsuba is boring. It is admittedly a slow manga, following an episodic format without a real overarching plot, but that's the point. It fits well with the kind of story it's trying to tell but it's not something that is edge-of-your seat engaging like Fullmetal Alchemist or Berserk. It's something you pick up to remind yourself that life is about the little things and it's worth living to just... live.

That being said, everyone should read this. Even if you don't love it, I think everyone can appreciate in one way or another.

This manga give me peace and smiles.

Maybe the last volumes are a bit loose, like if the author feels too confortable or maybe a bit bored of it, but the early ones are just perfect blast of joy.

This is one of the best comedy/slice of life manga for me. All the people are funny and it's have make me smile. if you don't want children now but you like see foolish kids it's the best for you

You may notice that the numbering of the chapters gets a bit wonky in the late 90s--after chapter 101 comes a second chapter 98, leading to the most recent chapter being numbered as 108 despite animeplanet (and some other places) claiming that the series has 112 chapters. My best guess as to what led to this discrepancy is that parts one and two of some of these stories were merged into single chapters when the tankobon version was published. Anyway, it's not really that important. There's 108 chapters of slice-of-life storytelling, 112 chapters of day-to-day adventures.

When the series started out, the artwork was kinda mediocre to be honest. The backgrounds were acceptable, but the characters were sloppy. But over time, the quality noticeably improved. The characters still have a cartoonish quality to them that matches the genre and tone of the story, but the shading and clothes have become a lot more detailed and impressive. And the background images--the landscapes especially--now feel like absolute works of art, immersive and beautiful.

The characters are endearing. The humor can be uproarious at its best moments, and leads to a pleasant atmosphere even when it doesn't induce laughter. Jumbo's deadpan humor leads to some of the best moments, in my opinion. I do enjoy the manga, and it's definitely a pillar in the slice of life genre. But the biggest problem with this type of story is that it can be difficult to tell whether we love the later chapters because they're actually good or if we mainly love them because of residual good feelings from the earlier chapters. Early on, the jokes hit hard. The antics are fresh and adorable. We fall in love with the characters. So then, being in love with them, we don't tend to take notice of "fluff chapters" or less hard-hitting chapters that may occur later in the series. And I'm not trying to say that that's necessarily an issue with the manga--the series never really feels stale, and it's always pretty pleasant watching Yotsuba experiencing new things and interact with others, even if it's not as exciting as early on. But I did feel it might be interesting to rate each chapter as I read the series, just to try to intentionally remove the nostalgia blinders that I otherwise might wear. These are my findings: