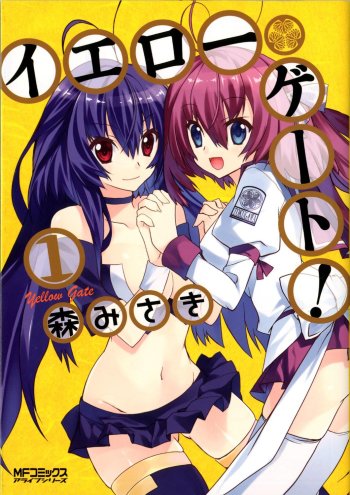 The two mangas are pretty much the same, with Yellow Gate being the more adult. Both have the same premise of boy accepting job due to massive debt and his new, super rich, boss beingf in love with him.

Again, Yellow Gate has more ecchi (getting quite extreme) and Hayate is generally funnier with more parodies, not that Yellow gate doesn't have any.

In short, basically the same series, fans of one will probably like the other.

The man Koharu loved wasn't cheating on her...he was cheating on his wife with her! And not only that...he was the third guy in a row to do so. Dejected, she leaves Tokyo for her hometown, and rejects a future of love and marriage for a simpler life. But things have changed—her parents are struggling, the cafê they ran is closed, and a creepy man keeps following her around. She thinks this may be it for her, until she learns that her hometown has allowed polygamous marriage, and she's in that man's sights as his third wife!

Yoshinori got saved by classmate Sakura. Yoshinori's true identity is Yuki, a VIP fortune teller who has clients. In order to pay for her older brother's debt, Sakura became his bodyguard?!

Shingo Chiryuu isn't much different than any other guy except for one thing... He's afraid of girls. Now he finds himself surrounded by girls, including the one whose attack originally instilled the fear in him, as he attempts to cure himself of his gynophobia.

One day, a forever D-rank middle-aged adventurer, Lucas, pulled out the legendary Holy Sword in a drunken stupor and became the strongest! Ever since that day, Lucas’ fate was greatly changed forever. Seeking love and to sate his desires, the reborn middle-aged adventurer's real adventure starts now!

Mikado Shuuji is just an ordinary guy, but he has a very unusual knife that he uses for cooking. It's actually a famous short sword that marks its owner as the head of the ninjas, and now there are hot ninja girls coming after him to take it back. Hinamori Botan is one of those hot ninja girls, but her efforts to attack Shuuji mostly end up inadvertently stripping her. After she concludes that she does not want to steal the sword and kill Shuuji, she ends up deciding to serve him as a ninja instead. Now she must protect him from the other ninja that come to claim his sword and his life.