Alt title: The Story of Me and the Overboard Companion 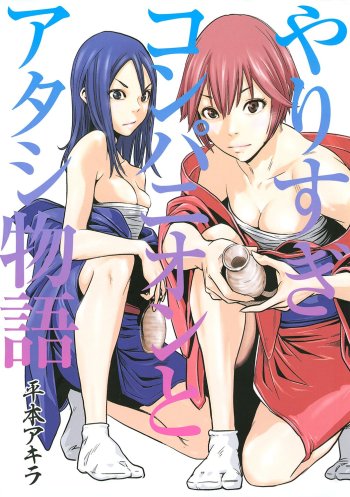 If you're looking for manga similar to Yarisugi Companion to Atashi Monogatari, you might like these titles.

I just want to see it! High schooler Yumeko is your ordinary high school girl except she's obsessed with seeing the male body part in real life. Determined, Yumeko decides to join the art club at school.

First of all, these two manga have explicit content. Throwing that out of the way, what's left is the absurdity. These two manga are ridiculously funny for different reasons:

Avant-garde's protagonist is a girl obsessed with the penis, so obsessed that she starts drawing them everywhere (please read the synopsis, it's hilarious); how can you keep living your everyday's life normally now that you know such manga exists? Come on, you need to try it.

Yarisugi Companion, written by the author of Prison School, is just.. too much. You only need to see what kind of costume the "heroine" of this manga wears (or should I say doesn't wear?) and you'll understand how messed up this story is. Oh and if you thought chapter 1 was crazy, keep reading it and you'll be amazed (not sure if in a positive or negative way) or disgusted, one of the two.

24-year-old Makoto Manaka has no luck with women. Constantly put into the 'friend zone' by the opposite sex, the man is so fed up that he's taken to pretending to be a woman online. But little did he expect that his antics would catch the attention of the deity Nandikesvara, a scantily-clad beauty who decides to turn Makoto into a girl! Now, much to his dismay, Makoto finds himself unable to stay either gender for long, as whenever he's aroused, he transforms into the opposite sex! And given he's drawn the lustful attention of both his male and female friends and coworkers, it seems the man's gender swapping days have only just begun...

One morning, upon waking up, people disappeared from the world. It seems only a single girl was left behind. A beautiful girl's sexual fantasy of seeking men and warmth!!

Taku, a high school boy has a crush on his childhood friend Riko. But unfortunately for him, Riko holds feelings for her other childhood friend, Naoki which causes Taku to be in pain everyday. One day, after learning the existence of a shrine named "Love wishes come true," Taku immediately went there and prayed for it's guidance. What will happen to his life from that point on?!

Meet Hana and Tohara. Two voluptuous women out to become fully fledged witches for life. To do that they just need to grant one wish to get their license. They see an opportunity in the form of a handsome Bishounen named Touma. But turns out he is a 24 year virgin otaku who is in love. Not only that, He has a not one, not two. But THREE wishes to grant... Can these Bodacious beauties take on the challenge?

Its about a boy that one day, wakes up as a big breasted woman. S/he has to deal with a pervert friend, new clothes and a mother that prefers him as a girl.

Kudou Yuusuke has to deal with the most annoying childhood friend in the world. She's Miyauchi Misao, and she wakes him up every morning, hangs all over him all the time, and generally follows him around like a loyal puppy. It's started to get a bit awkward now that they're in high school, and she's a bit more... womanly... than she was when they were children. Everyone at school just assumes they're dating, so it's killing Yuusuke's chances with the ladies. One day Yuusuke has a shock waiting for him; Misao has gotten engaged. She says that she's set to be married in spring, but she seems comfortable hanging all over Yuusuke in the meantime. The unfamiliar jealousy that the news has awoken in Yuusuke has spurred him on to making his own plans. He's going to try to become popular, and get a girlfriend, before Misao gets married in the spring.

Nanako is an athletic and free-spirited girl that excels in every sport she does. Many of the sports groups at her school request her assistance at important matches. Where she excels the most is when she finds herself in a bind that will strip her of her clothes, while Keisuke Kawara ogles. You would think Kawara is the luckiest boy alive until you see the end result of Nanako's "accidents."

Yaneda Shigeru is a guy living alone with his cat, Konbu, until she turns mostly into a human for unknown reasons. Though to Shigeru, this isn't a problem; he has a cat-girl fetish. The problem is, Konbu is stuck-up and wants everything to be elegant to fit her high-class tastes, even her name to be something more high-class. So, they each want to mold each other to their tastes; Shigeru an elegant butler, and Konbu an obedient, cute cat-girl. Will one of them win, or will they come to some sort of mutual understanding?