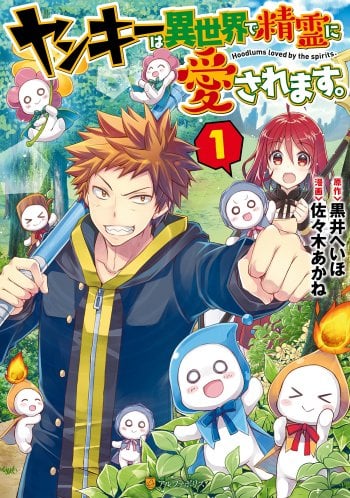 While trying to save a child who was going to be run over by a truck, Manai Zero loses his life. When he wakes up even though he should have lost his life, Manai is given the choice of being reincarnated, but in a different world, with a power called "Beloved by Spirits". A world of magic and sprites, monsters and adventures

I really really wanted to like this series. The premise is great, the whole "unlikable guy becomes loved by many in a wholesome way" is something that should be pretty easy to pull off, but some how this series made each and every character with "personality" completely insufferable The plot seems rushed and has very few encounters outside the party. The fanservice is light, but when its there, its drawn out. All the women suffer from UFCS (Useless Female Character Syndrome) and the male lead isn't that much better.  Will I read this to completion? Yes. Will I change/add to my review once completed? Probably.  For now all I can honestly say is that I'm deeply disappointed  SPOILERS The romantic interest? Garbage. So basic, with no personality other than being useless and a cheap yandere with forced feelings and no moral compass  besides "oh! Mr main character! I'm soooo pitiable~" Her sister? Also useless. She has 0 smarts, is a siscon, and is some how supposed to second in command of the strongest knight group. (Also not the lovable himbo stupid. The irritating actively hurting and endangering those close to her without a care in the world stupid) She isn't even the strongest character. No common sense, especially for someone actually from this world. The f*cking maid. Probably the least irritating female character, but thats only because her defining trait (loyalty to her miss) isn't always one note. A two faced girl who shows a good side in front of her lady and other nobles, and believes everyone is inferior otherwise (even if her lady tells her the opposite) she eventually drops the perfection act, which is why I found her ever so slightly more tolerable The rival character. Cocky outside his means, a complete asshole, and perverted. Sometimes we like pervy characters. Some times they make me want to burn the book im reading. He has no consistency other than consistently being a pain to the mc and his companions. He seems mysterious but its not a drawn out sort of mystery, he poses questions that are immediately answered after a couple pages, while still trying to keep the "unknown variable" character type in the traveling group Lastly the main character. His defining trait is that he looks scarey which makes people scared of him. His face isn't all that scarey. Angry eyes and sharp teeth. He's loving, misunderstood, disrespectful to authority, and some how has better street smarts than all 3 of the women originally from this world combined. He mainly has to act as the default mature one of the group as everyone else in the party doesn't seem to understand their actions have consequences.

The initial introduction to the characters is pretty funny and entertaining, especially Grace's overreactions. That said, the entire premise that Zero is scary-looking is undercut by the fact that he isn't very scary-looking. In fact, he's somewhat attractive, if I do say so myself. At least as attractive as this artist seems capable of drawing people, which isn't all that much. Amaris and Lilly aren't the worst characters or anything, but I also don't really feel that they're necessary. And even Grace doesn't seem to add much to the story once she switches from being someone who quakes in fear at the sight of Zero to being someone who glares in jealousy at the sight of other girls around him. In other words, the romance and harem aspects of the story don't really do anything for me. I don't really have any complaints about Zero. I've enjoyed him so far. Grace's quest to subjugate the lizardmen (ch. 9-13) is uninteresting and I'm not sure whether it's even necessary in the plot. The currently ongoing quest to meet the four Great Spirits started out interesting, but it's gotten less so. I think part of it is that it's just rushing from one spirit to the next, with each giving some partial cryptic answers about the nature of the spirits and what's going on with the Spirit Liberation Troops and Zero himself, but with no explanation as to why the first spirit can't just give the answers to all the questions. There's the semblance of an explanation given--that they want him to gather all the evidence himself and then come to his own unbiased opinion about things, so they don't want to unduly influence him. But that's clearly bullshit, since the second and third Great Spirits provide additional information. So why couldn't the first spirit have just provided all that information? Well, obviously, the author just wanted to spread out the info drops so that we the readers slowly come to a realization about the nature of the world, while also allowing for the inclusion of fight scenes in between each drop. But I don't like when the plot clearly bends to meta-reasons like that. Also, the plot doesn't have much thought put into it in general. As an example, in chapter 24, Amaris explains why she was attacking Zero: "It was because I really believed that you [Grace] were kidnapped at the time." But in the very next chapter, (the needs of the plot apparently changed), and Amaris is portrayed as having never doubted Zero for a second, being heard saying "Grace-sama and Zero-dono must have their reasons. After all, [Zero's] a man who wouldn't even think of something like treason." Though if she never actually doubted him, then that just brings us back to the earlier question: Why did she attack him? And we don't have a satisfying answer. Things sometimes just gotta happen, 'cause it leads to the fight scenes, ya know? It's supposed to be bad-ass for Zero to refuse to bow to people in authority, such as the king and the captain. And they seem to respond to his defiant individualism by respecting him and view his lack of supplication as refreshing. The manga can't exactly portray those in authority as getting upset at not being honored, since that would come across as petty and insecure. But it definitely is a bit weird how they just shrug off his attitude. By not showing subservience to their authority--through signs of honor and such--he is presenting himself as a rival questioning their right to power. And considering his strength, his threat as a potential rival should be taken more seriously. So when they just brush off his casual and dishonorable attitude, it sorta comes across as them cowering and retreating from a potential threat to their authority. [Reviewed at chapter 28]

In what is definitely in my top 3 favorite isekai mangas, Yankee Wa Isekai De Seirei Ni Aisaremasu is an adorable, fun, and unique little isekai.  Yes there are cliches (Truck-sama, girls falling for the MC, cheats) but it's really fun because this isn't your normal protaganist- No, it's a delinquent who favors an 'iron pipe' as his main weapon and couldn't care less if you were a peasant or a king- if you wanna go, bring it, punk.  ORA!  Lol.  While it does have its weaknesses (I literally hate every female character in this) it has an underlying, mysterious plot that keeps me hooked.  Plus, chibi spirits.  How can you hate that? 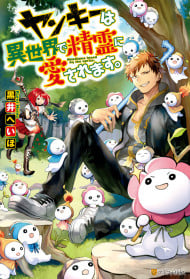