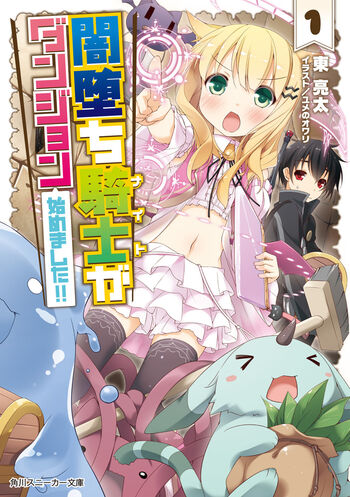 If you're looking for anime similar to Yamiochi Knight ga Dungeon Hajimemashita!! (Light Novel), you might like these titles.

Noir is the son of a minor noble with very little to his name other than a job offer–which is canceled before he can even start his first day. He does possess one rare trait, though: the magical ability to consult with a great sage, even if using the skill gives him terrible headaches! Unsure of what his future holds, he accesses the sage for advice on how to move forward and is directed to a secret dungeon filled with rare beasts and magical items. It is here that Noir will train, compiling experience and wealth, until he’s powerful enough to change his fate.

After a Japanese classroom was destroyed by a mysterious explosion all the students reincarnated as humans on a fantasy world except for a female student who had the lowest reputation on the classroom, she was reincarnated as a spider monster. Being the weakest monster on the dungeon she need to survive using all her human intellect and courage.