Yamada-kun and the Seven Witches - Reviews 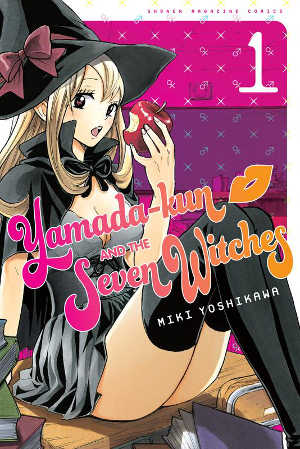 Yamada doesn't like school: he doesn't like studying and he can't make any friends because he's seen as a delinquent by everybody, so they tend to avoid him. One day he is having a bad one and, if things couldn't get worse, he falls down from the stairs together with Urara Shiraishi, one of the best (if not the best) female student of the school and their lips touch! Nobody's really hurt but.. they switched bodies?! Now Yamada is in Urara's body and vice-versa! How could that happen? This is how this rom-com called Yamada-kun and the Seven Witches starts. Discover all the mysteries that Suzaku High School hides, enjoy the adventure!

Overall I was really happy when Yamada-kun started, becuase it really was something special and it saddens me that it loses quality gradually. But as I said already, second and third arc ruined a bit for me because I believe the story should've ended after the first arc. Since the story continued, I must rate everything and this is why my ratings dropped. If you like rom-coms this is a must try: you might like it, you might not like it, but I definitely suggest trying it.

This was a pretty good and fairly original story concept.  The first manga does an excellent job to pull you in and grab your attention.  Urara is one of the prettiest girls in school and cutest and would make a strong contender for one of the top ones ever.  She is however more than a tad overly logical, dispassionate, distant, cerebral, and lacks a certain feminine charm like personality. Yamada is barely more than a thug though one who like Bruce Banner in Hulk, often finds himself helping people despite his abrasive personality and punk reputation.  Where the manga starts to lose itself is after the story arc with the seventh witch.  After this not one set but multiple sets begin showing up.  The stories then start to feel a bit drab and formulaic with no end in sight where you had one before you get to that point.  I can not help but get the distince impression adding more manga chapters after that critical end point was solely to make more money and had little or nothing to do with the story, creativity, or author's original vision.  The story does little or nothing to alter that impression either.  Things feel a bit slowed down and muted even disinteresting after that seventh witch arc appears and passes.  I paused but may return and pick up on it later.  It loses a bit of it's teeth but I still have hope that it may improve and get that sharp edge it had before.  Aside from that, the story up until and the end of the 7th witch arc are pretty good and keep a certain kind of connected purposeful feel to it through out.  Yamada comes off as a kind of outsider witch who is not affected by the same sorts of things that affects the regular witches.  Shinichi shares this ability to an extent as well but seems a bit less able to affect those around him either with his more meek less active personality or his less useful powers.

Yamada can and will wear down on you as his personality never seems to change all that much nor does it feel like he grows in a very constructive way or well at least not at a respectable rate. You might feel a bit let down how slow it is if it is even there at all.  He does help others but his situation never seems to improve much and more often actually tends to get worse.  In some ways this is actually similar to the anime Erased.  You will not exactly know what I mean until you at least get to the 7th witch story arc if not finish it.

From the 2 volumes I have read so far, this is quite an entertaining read!

Story: Yamada, the school deliquent accidently falls down the stairs kissing the schools brightest student, Shiraishi and switching body's with her. Switching body's with someone is a story we have all heard before, but Yoshikawa Miki makes it her own and a good page turner, it has a little bit of romance without the added melodrama and plenty of comedy. Although if you're offended by panty shots then I recommend to stay away from this one.

Art: Not bad but nothing special either. Although I laugh at some of the expressions Yamada has, cover pages are good with nice detail, the coloured ones add a nice touch as well.

Characters: It's what can make or break a story, I personally find the characters interesting with enough depth to understand each of them without it being dramatically over the top. It can be risky introducing new characters 'all' the time, but all are likeable and certainly make the story more enjoyable.

Overall: Originally I only read this because I was bored, unexpectedly it was better than I first thought after reading the basic plot. This is a manga for your to read list, so when you're bored this will certainly kill time nicely. Although it's a short review, (there are only 2 volumes so far) I will edit this in the future and continue following the series.

Yamada-kun had so much promise at the beginning: supernatural high school shenanigans triggered by kissing, and a mystery surrounding the "witches" and a handful of others who have these powers. There are consent issues throughout, with some plot-driven forced kisses; if you find that sort of thing bothersome, then definitely don't read this series.

Note: some spoilers ahead, though I've done my best to be vague about them.

For everyone else, this is a great high school rom-com... up until around volume 11. This is where the story transitions from the first arc to the second, and the plot gets even more convoluted, with new witches and additional mysteries. I stuck around through this arc, and the next, all the way to the end, to see what the payoff would be for main couple Yamada and Shiraishi, plus all their friends. The ending was perfectly fine, if a bit cliched, but there's also a hamfisted attempt to wave off the witch powers, which had been the entire point of this series, as nothing truly mysterious. Yes, we never find out the true origin of Suzaku High's witches, plus a new witch-driven plot point is introduced in the final chapter which just leaves one with more questions.

The pacing in Yamada-kun suffers after the first story arc as well, in part because of the complexity of the witch narrative, but also because there's so many characters to keep track of. Many of the later witches are hardly ever brought up again after their roles in the story are over, but that still leaves us with an enormous, chatty cast. A college exam prep arc that would've taken a few chapters in most other high school rom-coms is over a whole volume in length here. The timeskip ending is about three chapters instead of one. By the end, it's hard not to wonder what the point of all that filler was. Probably editorial pressure to keep the series selling, as Sean Gaffney has theorized.

The art in the series is polished at first glance, with the backgrounds in particular some of the best I've seen in rom-com shounen manga. The eyes of various characters, Shiraishi being a good example, frequently look strange when seen from a quarter-angle, and there's the occassional broken spine here and there. By the end, I wasn't a fan of the character art, but I did want to buy the assistants in charge of backgrounds a round of drinks.

This series has its moments, but shines brightest in the first third, when the search for the witches and the rivalry between the Supernatural Studies Club and the Student Council has some real meat on it. Don't expect as good of a time from the rest; the characters are still a fun bunch to read about, but the new complications thrown into the plot (memory erasure being a major one), not to mention the underwhelming revelations that follow, make for a mostly mediocre read.