Alt title: In Another World where Baseball is War, a High School Ace Player will Save a Weak Nation 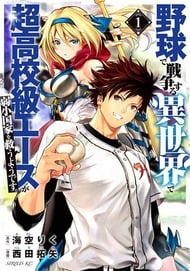 Tokonatsu Taichi took the summer Koshien by the storm as a sensational ace pitcher, with a full arsenal of pitches including a 98 mph fastball. But on the way home from the game, the team bus suffered a tragic accident and Tokonatsu Taichi lost his life... Only to be transported to a new world where all international conflicts are resolved by a game of baseball. Unfortunately, the country he landed in was the weakest, and had seen gradual loss of its resources and people to neighboring countries. Can Taichi turn their fortunes around?

353 users are tracking this. Log in to see stats.

Baseball and isekai? Baseball and isekai. Yep, 2 things I never could've imagined together are combined for this bizarre yet intriguing manga. Let's review it.So, imagine if 2-way phenom Shohei Ohtani got sent to the worst MLB team and was the centerpiece of their rebuild. Oh wait, you don't have to imagine that, because that's pretty much reality. Ohtani plays for the Angels, who are awful, and without Ohtani (and Mike Trout) would arguably be the worst team in baseball.Jokes aside, that's pretty much what this manga is about. Our main character is Taichi Tokonatsu, who, like Ohtani, is a 2-way phenom taking Japan by storm. He's the next great Japanese baseball superstar, except he dies on the mound. He's then sent to another world by God, and tasked with transforming a horrible baseball team named Freedom into the dominance force of their world composed of beastmen and other animals.Now, in Freedom's world, baseball is war. Baseball settles conflicts, determines territory, and even decides life or death. Freedom is close to no long existing by the time Taichi arrives. Their team is bad because almost all the adult men have been taken captive. Thus, Freedom's team is entirely compsed of young women, kids, and the elderly. Their best player when Taichi arrives is a young woman named Krusche.Now that the synopsis is over, let's talk about what I like and don't like. The premise? It's definitely interesting. Heck, the manga does a good job playing on the importance of the pitcher-catcher relationship, and other key elements of baseball that might be overlooked, and there were some humorous moments about it. Taichi's a solid MC. I like how despite his impressive skills the other teams overlook him. The bad? Well, this manga likes to inject fanservice, and lots of it. Most of it is pointless too. It's not fanservice where there are mascots or cheerleaders or ballgirls or stuff like that where it's at least semi-relevant to the plot. It's sequences where the manga could be talking about pitch selection or not tipping your pitches, and they'll just throw in some pointless fanservice scene, usually involving Krusche. It's annoying and ruins the manga a bit.You know, as I was typing this, I just couldn't think of giving it any score other than 5/10. It's not outright bad, but it is a bit disappointing. Once the pointless fanservice scenes started they didn't stop, and everyone outside of Taichi and Krusche is mostly forgettable.

My primary enjoyment of this baseball isekai (and I do find it more enjoyable than not) has come from the portrayals of how one can use strategies and keen insight to adapt to opposing playstyles, exploiting any weak points. I've also appreciated the superhuman capabilities and am interested to see how far that aspect will be taken (so far, it hasn't come across as all that extreme). In other words, I like the baseball games themselves for the most part. Though I should mention that the game against Wolfsmund wasn't all that great, 'cause Taichi just dominated so thoroughly. The game against WST has been far more challenging, and thus more interesting, and I'm sure that games going forward will also tend to be on the more challenging side of things. I'm not sure how I feel about the way Taichi is able to dominate so much largely because of fe is portrayed as having superior baseball know-how than feir opponents. I think ideally, I would've liked to see Taichi bringing Earth-style baseball to a world wherein there were just vastly different strategies and physical techinques which hadn't ever developed on Earth. Perhaps even slightly different rules ('cause it's not as though baseball has always had the same rules even on Earth). That way, Taichi would've still had something to bring to the table, but fe still would've had a whole new world of baseball stuff to learn from and adapt into feir knowledge. As is, it just feels like lazy worldbuilding, like the author didn't want to put in the effort into thinking about alternate developments that could've occurred in baseball and so just fell back on the idea that all alternate realities would eventually reach the same exact techniques and stuff as Earth. The ecchi elements are also a red mark against the manga, at least for me personally. I think the author threw in the fan service and sexualized imagery as a cheap way to make up for the lack of good characters. I don't think any of the characters are all that compelling. The story is able to remain interesting despite that largely because of the engaging baseball games. There's some stock righteousness and good-versus-evil ideas that create enough of a narrative intensity that it remains engaging. And then any empty space is filled with cute outfits and butt shots and tentacle porn and stupid manga tropes and blushing and stuff. It's weak. Honestly, if this manga had good characters (and thus didn't have the need for the ecchi filler), then it might've had a shot at becoming a classic. As is, it'll probably be a decently fun read while it lasts--but once it's over, I doubt I'll give it much thought ever again. [Reviewed at chapter 17]