Wrapped Around your Little Finger 2 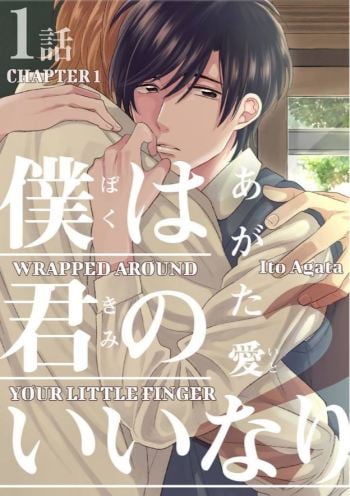 If you're looking for manga similar to Wrapped Around your Little Finger 2, you might like these titles.

“Ah~ I want to fall in love!” wishes the handsome Sugisaki Mitsuru, who dreams of sleeping with the one he loves. And as fate would have it, Sorachi Ryuuji, a rather cute and very athletic senior, happens to materialize in answer to his prayer. The only problem is, Ryuuji is a late-bloomer and rather slow on realizing Mitsuru’s feelings for him, thus starts the angst story of pure love…

Keita, a high-school student, witnessed a kiss scene between Shin, his close friend and Megumi-senpai, a repeating student in his class. "Although senpai is cute, he's a guy" - when Keita criticized that, Shin started to cry and said: "I fell in love with him". Looking at the best friend he's proud of for his good looks being changed completely, Keita's feelings get confused...

It's Yuzuru's last year of high school, and he still doesn't have any friends. In fact, he's almost invisible to everyone's eyes... The people who do notice him even call him "Ghosty." One day, he becomes friends with one of the most popular kids in school, Kyoya. But, Kyoya's idea of friendship isn't exactly what Yuzuru expected.... While Yuzuru struggles with this new-found "friendship," he realizes that behind all his popularity, Kyoya feels alone, too. The two opposites are soon drawn to each other as they see that they actually do have some things in common....

Fooling around as always, he kisses a random guy walking by. But as a result of that, something unexpected happens!!?

One day, Yoshimura bumps into Shima, the terrifying third-year with scary eyes and even scarier rumors surrounding him. Thinking that Shima's angry, Yoshimura begs for mercy, not knowing that Shima's just...a sweet tooth? Hobby baker Yoshimura ends up sharing homemade sweets with Shima every day, realizing the famed bad boy isn't that bad at all. All is well until one day when Yoshimura's teaching Shima how to bake, he somehow accidentally sneaks in a kiss...?

Arimura Ikou and Itou Yousuke have been going out for several months after Ikou confessed his love to Yousuke. Yousuke is the most worried about their relationship because he feels like he cannot express his love as well at Ikou. Will he be able to finally shower Ikou with his love forever?

"My hero alone... is how it was supposed to be! Why is that guy always by his side?!" After Hirokawa Hozumi was saved by Odajima Yamato, whom he then fell in love with, and changed schools to chase after him. But because Yamato's childhood friend Misaki is always by his side, Hozumi becomes frustrated. Every day he takes out his anger on Misaki and Yamato gets angry with him. Although he is glad about any kind of feelings Yamato has for him, Yamato one day punishes him with a kiss...?

My senpai is super-hot, super-popular, and a super-model. Rumor has it that he always invites his target to the library and ravishes that person right there and then! Which is why I was totally shocked when he suddenly asked me to join him at the library!? I'm ecstatic!!! My body is already burning in anticipation!

From middle school, high school to university, Yui’s kouhai, Mikki, has always been chasing after Yui. Even though Mikki talks cheekily all the time, he seems fond of Yui... Unconsciously, Yui started feeling a sense of superiority over Mikki and ends up getting ahead of himself, hence provoking Mikki...?!

The kouhai that confessed who was fidgety and red-faced, turned out to be Shuichirou. Although Atsushi rebuffs him in less than 3 seconds, this doesn’t leave him to his peaceful life, rather, it leads to a daily love attack from Shuichirou. Even saying his type is “girls with big boobs” doesn’t stop Shuichirou. In the midst of that, Atsushi tries to get Shuichirou to back off by doing perverted things to him…?!