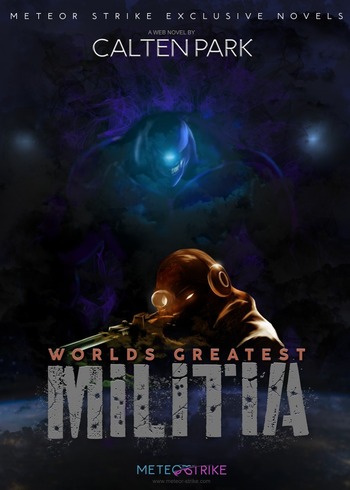 Royal Roader on My Own (Novel)

‘Royal Roader,’ the game that I ruled as an overlord was ending its service. Shit! It was my life’s only pleasure. The last day! I used all of my strength and in-game connections to defeat the final boss monster, Demon Heros. As a reward, I earned a Marble of Wishes.

The Little Prince in the Ossuary (Novel)

In a world plagued by Morgellons, a deadly disease that turns humans into non-human creatures, people have chosen to abandon their humanity in order to fight against the bloodthirsty corpses. In the end, there will be no humans left on Earth. But that harsh world is, in fact, a world fabricated merely for entertainment. A world for humans to live in exists neither inside nor outside. This is the story of a boy who, while living a miserable life, stares at the stars as he desperately tries to keep his humanity.

Humanity has been gradually transported to the Abyss by a bored god to compete against other races and monsters. The problem is… humanity failed. In a last desperate push the strongest survivors chose a comrade to travel as far as possible back in time.

Our protagonist, Shang Jianyao, is crazy, literally crazy, at least that's what the doctors said. Living in a huge, underground building of Pangu Biology, one of the few remaining factions in this apocalyptic wasteland known as the Ashlands, he acts in unfathomable ways that's head-scratching, comical, and shrewd. So is he really crazy? Probably. He has a grand dream: to save all of humanity. Intricately tied to this dream is something everyone in the Ashlands believes in: Deep in a particular ruin buried away by danger and famine, a path leading to a new world awaits. To step into the new world, one only needs to find a special key and open that certain door...

[You have entered the dungeon at Gwachun Station’s 1st Exit.] When former high school student Kang Woojin finds himself returned back to Earth after being forcibly summoned to a foreign planet for 20 years, he soon finds that Earth is not the same, normal place as he once remembered it to be. With his former strength and age reset back to zero, watch Kang Woojin as he gets back on the path to becoming the Earth’s strongest Necromancer!

One day, I was given the mysterious power of Hwanmong. If I killed a monster in the dream then my level would rise in reality. My home in reality became a base in the dream. A dimensional strategy RPG where reality and dreams are linked! Earn money and become stronger! Now, I will dominate the entire world.

Su Yu has a secret. He's been having dreams where the Myriad Clans have been hunting him for ten years and more. The nightmares are endless. When he is 18, Su Long, his father, heads for the battlefield to fight the Myriad Clans. A few years later, Su Yu will bring tribulations to the Myriad Clans.

On doomsday, Tang Yu unexpectedly got the Lord of the End System, he remained very calm. Lack of experts? I will construct a pub so I can make ten draws in a row. Lack of food? I can’t be too cheap with the large pack full of food supplies sent from the market. Lack of safety? Arrow Tower, Mage Tower Artillery and all kinds of automatic defence buildings. Having many isn’t too many. Lack of equipment? Workshop production must produce high-quality items. Sir, would you like one? We are having a 20% discount special at nine! ... In short, this is a story of Great Lord Tang building up his territory, attacking some monsters, and ripping off... Cough, making some money at the same time.