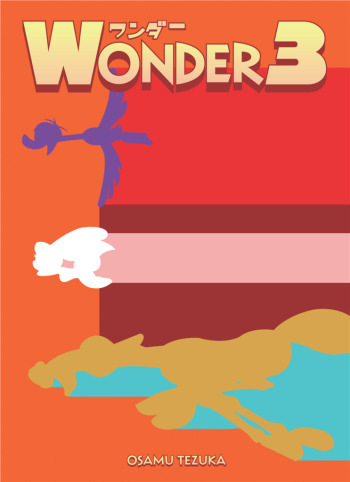 Tezuka's shounen/shoujo work has always been hit or miss with me, much more than his gekiga/seinen manga. For example, I consider Black Jack to be one of his best, but didn't like Princess Knight much at all. Wonder 3 falls somewhere in between these two in terms of quality.

This manga ostensibly follows the adventures of three aliens who have come to Earth and disguised themselves as animals in order to investigate the planet, and find out whether or not it should be destroyed or spared. I say "ostensibly" because once the trio's mission begins in earnest, the main focus of the story largely shifts over to two brothers, secret agent Koichi and elementary schooler Shinichi. The Wonder 3 still have a role to play, but it's a much smaller one than I'd expected, given the premise and very title of this series.

The Wonder 3 themselves consist of Captain Bokko, disgused as a rabbit; Pukko, as a duck; and Nokko, as a horse. Having read many other Tezuka works, it was something of a pleasant surprise to see that the group's leader is a female character, and a rather capable one at that. Women in Tezuka works usually conform to the prevalent gender stereotypes of the time, and although Bokko does have a generic "feminine" side to her, she is one of the more well-rounded such characters from the God of Manga. Pukko is a cantankerous hypocrite: one who decries the violence on Earth, which he is more than willing to fix with a drop of the group's antiproton bomb. His duck form seems to be deliberate, considering that two famous Western duck characters, Donald and Daffy, have similar personalities. Nokko is unassuming and fairly passive, and aside from his talent for building all kinds of machines and gadgets out of junk, isn't all that interesting.

Going back to Pukko: he does have a point. The Wonder 3's investigation happened because the powers that be at the center of the Milky Way are horrified about all the war and violence happening on Earth. The human brothers they encounter (and stick with throughout the whole series, despite Earth being a massive place to investigate...) are each violent in their own way. While Koichi battles agents from foreign countries, Shinichi gets into fights not only with other kids, but also adults. Shinichi is honest to a fault, and his hatred of liars and corruption, one way or another, almost always leads to punches being thrown. Koichi and Shinichi's propensity for getting into fights is something which remains fairly consistent throughout the course of the series. This odd disconnect-- constant violence from the heroes in a manga whose core premise discourages violence-- is also at play in a series which would start publication just a few years later: Barefoot Gen. That famously antiwar series has its own fair share of boys getting into fistfights, kids being slapped hard across the face, and so on. This is another "of its time" aspect of Wonder 3 (and Barefoot Gen) which hasn't aged well.

Despite these issues, the story is reasonably well told, save for a bit during the final arc where one character says something, but then acts contrary to his words not much later on, with little explanation as to why. There are other disjointed moments, but that one stuck out at me, and I won't say much more than that, as that'd be going into full-on spoiler territory. A certain aspect of the ending is strange and unexpected in the way Tezuka can sometimes be, though it also felt a little tacked-on.

The art is very good shounen-level Tezuka, with some inspired bits of paneling and composition, plus the occassional gutter-breaking gag. Don't expect Phoenix-level artistry, but it is well done nonetheless.

If you enjoy Tezuka (or just old-school manga) action-adventures and want to read more of that, Wonder 3 is decent. However, it isn't much more than that, especially in terms of storytelling. If it's expertly-crafted Tezuka shounen manga you're after, there are much better options available.