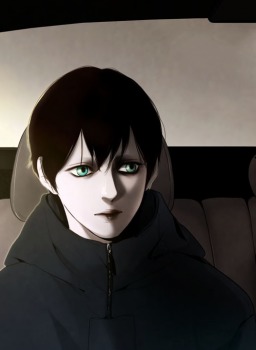 I just want to get my thoughts down while I'm reading it (shrug).

The art is beautiful, with glossy-skinned characters and soft shading, as well as Winter Woods's gorgeous blue eyes.

Winter Woods is basically Frankenstein's monster: A being that somehow lives and moves with the body of a human but suffers from the lack of possessing an innate understanding or connection with other people. Right away this brings about a certain question: Is he fairly emotionless and disconnected because he's not human or because his Master isolated him from the villagers for many years and did very little to teach him how to develop feelings?

Nature vs Nurture in its most extreme sense.

Winter Woods simply shouldn't be, but he is. He reminds me of a much more naive, amoral Ulquiorra from Bleach, both in looks and behavior, almost like an inherently gentler younger brother. Much like a non-stick pie tin, nothing that his master had taught him in the ways of the world really stuck (mostly because he didn't teach him anything to begin with). People are new to him. Emotions are new. Touching people, talking to them; the concept of someone's personal belongings, and the idea of pain. All are new experiences for him by living with Jane, a struggling writer who has agreed to house Winter on a whim and for the possibility of getting a good story out of it.

All of this is fascinating to watch. I see parallels in Winter's behavior with that of a child struggling to connect to people after years of neglect have left a hole in their psyche where love and human bonding should have been. The simple joy Winter acquires when he realizes, for example, that what we call a "hug" feels good to him is very touching. In these moments the author focuses on those connections, fleeting though they are, because they're important for Woods and his understanding of how everyday human life is.

A concurrent story involves a blind girl who is in love with a very shady man who seems to keep her around as a pet of sorts, and she doesn't mind in the slightest. Their relationship seems 90% her, 10% him but it's still an interesting segue from the main action of Jane and Woods. The man is a twisted bastard, I'll give him that...

My only complaint about this story is the parakeet/cockatoo/whatever-bird named Roy. He is so annoying. I wish he wasn't a character or his personality was changed entirely. He constantly belittles everyone around him, is stuck-up, rude, and gets Winter into trouble. He's selfish and a smartass. If this is the author's attempt at humor, it's unnecessary and drags everything down, I find. I mean, every time I see Roy on the page I internally flinch like "Oh God what is the little shit going to say next? I don't care that you exist, please go away, for the love of all that is good."

You will feel protective of these characters, though Jane just seems to be a plot device or a useful tool that gives us the opportunity to further look into Winter's life. I like her and all, but not as intensely as Winter himself.

One thing that kind of put me off was that in the beginning everything was very serious and there were very rarely any "silly faces" to be made. After around half-way when Winter gets settled in, he's like Yotsuba in all the shenanigans he gets into. It's thankfully tempered by his endearing naivete (also like Yotsuba!) and his growing sense of what it means to be human, eventually a slice-of-life with a subtle conspiracy-but-not-quite under the surface regarding his past and the people that are constantly monitoring him without either Jane or Winter's knowledge. It certainly goes by fast and should be something to take a look at.

Winter Woods has a very good plot to it, especially the art. As Winter progresses in learning how to be a human, his face becomes more human and develops lots of character development. The art makes certain suspicious characters look intimidating. Winter might seem intimidating at first, but he's a cinnamon roll. The backstory for Winter had a different type of art (more old-timey lol) but it fits with the whole setting. If you're looking for a supernatural romance with an interesting concept, then this story is a good one to read.

This manhwa really make me realise something. Winter is a guy, heartless guy that make a seed became his heart in order to feel. His love toward Jane, really make me cry. That little bird, arrogant but in the end he just care so much about Winter. Also, mysterious guy (kinda forgot his name) maybe he's a bad guy for letting his lover wandering around like that and seek a revenge from Winter? You just need a lot of tissue and get ready to read a really different manhwa. I promise, it's a happy ending.

*sorry for my broken English and I read this a long time ago, so kinda forget the characters name😅

I might as well start with reviewing S1 as I just finished it there so let's just get into it!

The start of the story sounds good enough like it has got that Pinocchio, Red Riding hood, Alice in wonderland and The Little Match girl vibes to it.

At first, I really didn't like the annoying side characters such as Roy the cockatiel and the painter neighbour. However as I'm trying to get through with reading this webtoon, you do get use to them if you try not to let them hinder your reading experience! Trust me I have tried to drop this a few times because of them but lads, Jane and Winter are the only ones here who keep me reading here lol!!!!!

Let's just move on to S2 and see what this dark "fairy tale" brings for us !

I read winter woods a while back and it is simply one of my favorites. This review is strongly based off of my personal opinion but overall Winter woods is an incredibly constructed story which I think almost anyone can enjoy.

I was used to the more basic romance storys so when I first started reading it gave off a darker vibe. Very early on I found it extremely similair to the Tim Burton movie "Edward Scissorhands" but for me it only made the story more enjoyable.

Although that was the vibe at first, the more I read the more the story became appealing. The art is simply fantastic and the emotions displayed throughout the story are simply incredible, some moments in the story make you feel sad while some make you feel overloaded with happiness! lol.

Then my favorite part, the characters. There was an assortment of characters and they had a range of personalities. Each character held an importance to the story which was satisfying to read. Some characters you just love and hate.

Overall Winter Woods was a beautiful story, I find the plot interesting and the emotions it expresses. I recommend definitely reading the story and I promise you will be pleased with the end result. I am now moving on to the artist's new work "Mystical"