Alt title: I Am Picking up Fragments in Player Unknown's Battleground (PUBG) 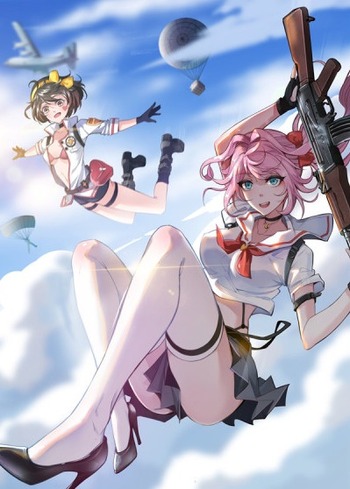 A.D. 2115 — the island nation once called Japan is now known as the “17th Far East Imperial City Management District.” The citizens were promised a life of peace in exchange for some of the comfort they were used to having. People believed their lives would never change and tomorrow will be the same as today. No one suspected the impending doom which their society was about to face…

Twenty years after her awakening, the hottest witch in gaming history is still searching for clues that could help unravel the mysteries of her dark past. Aided in her quest by the clandestine weapon smith Rodin – and his deadly creations: Scarborough Fair – Bayonetta continues to leave a trail of angel corpses in her irresistible wake. Her search for answers leads to encounters with a mysterious – and eerily familiar – little girl, a vengeance-obsessed journalist, and a deadly white-haired beauty that seems to know more about Bayonetta than the witch herself.

A beautiful American blonde who's on the run from the mob turns to the City Hunter team for protection, and Kaori and Ryo are weak when it comes to million dollar rewards and smoldering hot clients, respectively. After a few rounds of ambushes and sexual harassment, the deal is starting to look more than a little fishy, and Ryo is not usually slow on the uptake, despite appearances would suggest. Sure enough and once again, things are quite not how they seem: Ryo finds himself tangled in a web of conspiracies and the only way through is paved with explosions, gunfire, and stolen lingerie.