Will You Be My Cute Crossdresser? - Recommendations 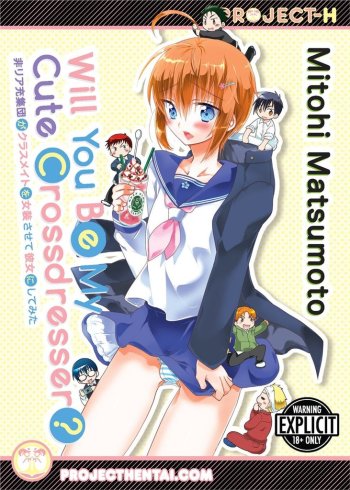 If you're looking for manga similar to Will You Be My Cute Crossdresser?, you might like these titles.

A trap named Nono goes to his lesbian friend, Sei, to become cuter than he already is...

Nono is a cute trap who wants to become cuter. Sei-chan is, according to Nono, an ultra-sadistic, full-blown lesbian. Will Sei-chan fall for Nono-senpai's charms?

Tomo Fukuya loves taking pictures of himself while cross-dressing, and he's gained some notoriety among his schoolmates because of it. He participates in his school's beauty contest during the school festival against his friend Kei Okabe.

Having upset the president of the student council and embarrassing her in many different situations, Tsukasa is forced to do a small "punishment" by the president.

Amasaki Asuka has finally gotten into the school she wants, a school where Togo Hiroshi, the man who rescued her from a subway groper, works as a teacher. She has a big, intensely sexual crush on him, but he seems to not remember her. When Asuka arrives at the school dorm, the dorm leader, Shiga Kahori, shows her around. Asuka is shocked to realize that she has the same sexual feelings for Kahori! Will Kahori return her feelings?

In order to be bought by a rich family, Narumi Inoue, hiding the truth that he is a man, goes to a girls' school. As a trainee, Narumi was sent to serve a girl from a rich family who hates maids (only weekends)! Keeping the 'heart of treating/serving people,' Japanese maid, Maid in Japan, Narumi's battle will start…!?

In an effort to gain an apprenticeship with his favorite author, the author imposes a set of various guidelines and conditions for his apprentice to follow which involve cross-dressing and embracing the lifestyle.