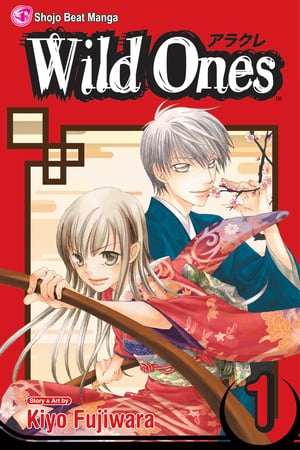 Sachie Wakamura's mother has just passed away, making her an orphan. Suddenly, a man claiming to be her grandfather appears asking Sachie to live with him. Things aren't as simple as they seem to be when she realizes her grandfather is the boss of a yakuza gang and she is to live with him and the rest of his men. To make matters worse she is assigned a bodyguard named Rakuto, who is the handsome, popular student council president at her new school. Sachie must now try to fit in with her new family and deal with her developing feelings for Rakuto, who appears to only see her as the granddaughter of his boss. Are Sachie and Rakuto destined to continue in this master-servant relationship forever or will her feelings finally be reciprocated?

This review may contain grammar and orthographic errors. I'll try to fix them later.I fixed the errors, but there still might be some of them in the text. If you see any, just let me know.   Arakure (AKA Wild Ones) was the first shoujo manga I ever read. You may wonder: how did a guy (that would be me) end up reading such manga? The answer is: the setting seemed similar to the one found in Gakusen (which I liked quite a bit), besides that, I just wanted to read something different from the usual senien and shonen stuff I read\watch. While Arakure succeed at being something new to me, I couldn't help but notice its numerous flaws. Story: Sachie's mother dies. On the day of the funeral she is approached by an older yakuza who claims to be her grandfather. Having nowhere else to go, she moves to the old man's house (more like mansion) which also happens to be a yakuza headquarters. There, a guy named Rakuto (who is about the same age as Sachie) gets assigned as her bodyguard. Both of them also go to the same highschool. Obviously those two are the main heroes and they got feelings for eachother. Now let us move to flaws. First of all there is, what I would call, "broken storytelling". In other words the story can be sometimes confusing and hard to follow. It seems to be caused by insufficient ammount of lines in dialog or\and image frames. I'd say it is a major flaw. I encountered it before and after reading Arakure, but never on such scale (except for Ouran Host Club manga). Another problem is that there isn't anything particularly interesting going on through most of the series (the series gets boring and tiresome). The main aspect of this manga was suppose to be romance, yet there isn't much progress in that field through most of the manga. Characters' feelings are revealed somewhere at the beginning of the manga, but that is followed by beating around the bush which lasts till the last few chapters. Maybe the manga would be better if it concluded shortly after characters' feelings got revealed (there was at least one opportunity for that). I didn't found the yakuza jokes particularly funny in Arakure. Most likely because I've seen most of them already in Gakusen. There was yet another thing which I found annoying. Namely the male lead "almost sexually assaulting" the heroine. Let me explain what I mean. In shonen (usually echii) manga\anime there are awkward situations where a guy accidentally falls on a girl (or the other way around). I hardly consider those romantic**, but that's not the point here. In Arakure the male lead would jump on the girl out of his own will (is it common in shoujo manga?), but he would stop there, stand up and pretend nothing happened. Considering the circumstances, this ends up being even less romantic than the stuff that happens in shonen manga\anime (which I mentioned earlier). Its like: the characters have feelings for each other, but they haven't confessed them in any way, yet they go this far, well actually they don't. Maybe author found this to be odd as well, because it stops appearing later in the series. I presume that "almost sexually assaulting" is just a form of fanservice (shoujo style fanservice?). Art: The character design isn't particularly bad, but drawing gets messy quite often (its still better than in Ouran Host Club). I don't have much too add. Characters: The manga revolves around Sachie and Rakuto and other characters don't get developed much. In fact other characters don't appear much unless it is convenient for particular arc in the story. Even the main duo doesn't get much development. However they do show some signs of inconsistency through the series. I probably should put some examples of said inconsistency here, but I forgot all of them (the manga isn't extremely memorable), though I do remember that there was such inconsistency. Other than that, the fact that Rakuto has feelings for Sachie from the time he was a small kid would indicate a more innocent love. However that clashes with his "lust" side (I know I exaggerate here a bit). Overall: So why did I give an overall 6 when I gave lower partial scores and ranted so much about various parts of the manga? Well, I did enjoy reading it, as it was something new to me. Also thanks to this manga I found out that shoujo romance is slightly more romantic than its shonen counterpart. Had I been familiar with other shoujo manga before reading Arakure, I probably would have not enjoy reading it. Unless you like anime\manga about yakuza or you think it is interesting, that the manga revolves around the main duo 90% of the time, I wouldn't recommend reading it. * Broken storytelling may be caused be a poor translation. In such case, there might be nothing wrong with the storytelling in the original manga. Is that's the case with Arakure? I have no idea, but the English in the translation I read wasn't particularly bad. ** Some exceptions might exist though.