Why Are You Doing This, Duke? 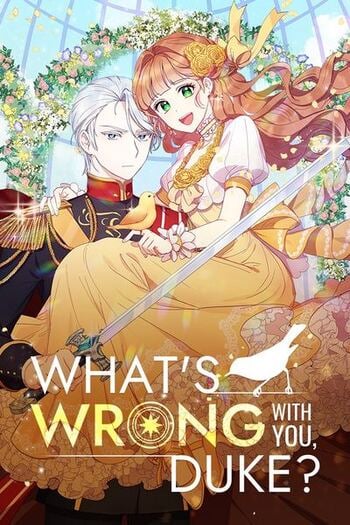 “My sweet songbird – my eternal love – don’t make such a sad face. When my little songbird gets sad, it feels like my entire world is raining.” The Duke, known to many as the grim reaper, “Rowan Peruka”. He, the very person who was about to chop off my head last month, managed to become my husband?! He took me in not as a second or third wife, but as the first?!! I’d love it if this was true love, but this is all thanks to a mysterious magic spell. And the magic spell’s power has been weakening to boot!

At first I thought it'd be a weird plot with low developed characters. It is true in parts. The way the Duke becames completely dumb and on four legs for the MC is out of this world. Really. It gets boring sometimes. However, after a few chapters it improved a lot. Especially because of the major changes on the couple dynamics. At this point, I guess the plot got better and there are more things to be explained during the next chapters. The MC makes me feel sick at most part of time. I got the feeling that she is too superficial. Of course she has a complex past and many complicated relations, but I understand from what point she's coming after 35 chs.  I liked how the plot and the characters developed after chapter 30. The Duke himself is something else. He's got the Omg I Am The God Of Death And Feared All Over The Country vibe that I love so much, but he's also pretty intelligent and capable of realizing important details as they happen.  In other perspective, I'd say "don't read", but I'll change it for "survive until the first 25 chapters" and pray for the best.

The story is quite fast paced and doesn't give much backstory on the characters. The whole magic thing is also preposterous and isn't ever really explained during the entirety of the comic. There are a few plot holes that are yet to be filled and many unexplained events have occurred. I'm not sure if this is just one season (the 48 chapters) or if it's the whole story, but if it's the latter than I would be very disappointed, so I'll be going under the assumption that this is just one season (and there are more to come). Story: The overall idea of this is good and entertaining. It leaves a lot of room for creativity. However, I would argue that there is major room for improvement. The death of Erin's mother, her abuse, the magic, the duke's love, her mother's sister and the crown prince's motives. These are all things that haven't been explained properly in the slightest. Mystery is good, but too much of it just leads to confusion (even more so if this isn't a season). It's very badly put together and if this was implemented well, it could've been that much better. I personally only continued reading it for the amazing art. There's too much going on and also too much focusing on needless things. Although, I do believe that it is certainly entertaining if you ignore the terribly put together storyline that looks almost rushed. Art: There isn't really anything for me to find fault with in this area. The art style and colouring is beautiful and it's very aesthetically pleasing to the eye. The only thing I will say though, is that I noticed the illustrations seemed to have gotten slightly worse over time (obviously not much, but there was definitely a bit of a downgrade in minuscule details). Characters: The duke is a cold hearted man who doesn't hesitate to kill. Erin was bound to have died by his sword without the use of a mysterious magic power that made him fall in love with her. However, to her dismay, he shortly regains control over himself (and his other self now only appears when Erin cries or looks extremely sad). Of course, he does end up falling in love with her for real anyway. This is all fine and dandy but there is one problem that I am constantly reminded of. He is worried that she only loves Lex (his tranced state) and not his real self, but why has he never wondered why he loves her instead? In my opinion, his feelings seem like it's the effect of the spell and not his own. It's weird to me that he's not questioning this at all. He could be trapped in a delusion of emotions for all we know. One other thing is whether the magic was meant to make him love Erin in the first place. This is brought up by Erin's aunt, who is likely acquainted with some sort of magic, so this is an interesting point. We, as readers, don't even know what kind of spell he is under. It also feels like the characters aren't very easy to relate to either. I don't know how to explain it, but I don't really feel that they love each other, nor do I feel any compassion for the two. They just feel like two characters to me, rather than a couple. I just don't feel any sort of empathy or connecting emotions for them. I can't really explain it. it's not tear jerking or moving, they just don't feel real. Anyways, that's my take on this comic. It has potential and could definitely get better if they improve later seasons, but for now, it's not anywhere near great in my opinion.

Well i had a good time reading this manhwa. Boring? Not yet. It's Light and CUTE. perhaps i love such cheesy tsundere story like this ~