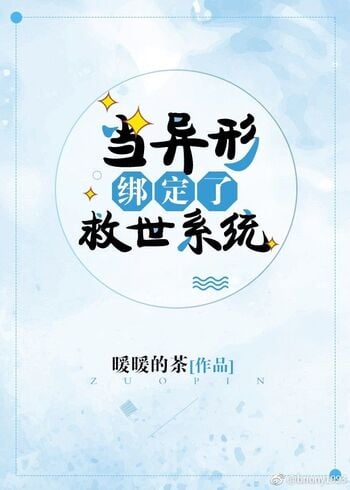 If you're looking for manga similar to When an Alien Is Bound to a World-Saving System (Novel), you might like these titles.

Shi Qing’s task was to be a protector. It was only after transmigrating to various worlds and eagerly counterattacking the villains there that he realized that he was the biggest villain of them all. Afterwards the Gong that initially despised Shi Qing discovered: He's such a good person!

The Target Always Thinks That I Like Him! (Novel)

After the nth time of failing a marriage meeting, Xiang Han got himself a job: good treatment, high salary, free world traveling with food provided, house provided and even a ‘lover provided’?! At first, he thought, apart from having to travel into the body of a scum cannon fodder, a scheming fake white lotus, everything else was okay. It was only later he realized that saving the target was also a problem. His imagination was neverending, even eating a cup of ramen was seen as a way to rouse his ( target’s) interest!

I Really Am a Slag Shou! (Novel)

Chi Zhao binds with the slag shou system, and if he succeeds in his missions, he will be rewarded. But who said life is easy! A rich old man who was slagged by him: “I know you love me. Your past pains, I’ve already investigated them.” The star admiral who had been slagged by him: “Don’t be reluctant anymore! I’ve always known that you didn’t betray me.” Chi Zhao burst into tears: “Boss, believe me just this once. Let me get the reward, okay?”

Every World Seems Not Quite Right (Novel)

For some reason, Shao Qian devoured half of the system that tried to devour his soul after tricking him into completing missions in worlds where he was horribly humiliated. Since he didn’t feel like returning to his original world anymore, he decided to return to the worlds of which he had the coordinates and retaliate against them! But…… Why is it that every world seems not quite right? Why is the female lead completely ignored by the male lead who, for some reason, is currently sticking to him like glue?

What is the experience like after transmigrating into the novel’s foreordained miserable cannon fodder? Su Zui, who had only ever treated other people as cannon fodder, expresses—— Your father is still your father. Winning just by laying down, system silently gave his family’s host a call: Papa 666. Boss: Be good. A single parent family isn’t good for the child. Call me papa number two. System: ??? Even though the roles assigned are all definitely touching and inevitably miserable cannon fodder, this does not hinder Su Zui’s path on oppressing main leads to the point they question their life.

As the Minor Gay Rival in Het Novels (Novel)

There are always four kinds of people in the traditional Mary Sue world. The Male Lead, the Mary Sue female lead, the woman who never wanted to see the female protagonist live a good life, and the infatuated man willing to destroy heaven and earth to get the female lead. However, with the rapid expansion of the army of rotten women, there is also a growing type of character, and that is a man who is also infatuated with the male lead… This character is referred to as the gay guy. They share the same infatuation like the second man, also has a tragic end and works together in hindering the male and female protagonist’s love. Fan Yuan has walked in every time and space playing the gay man. He had always enjoyed it, until one day, with superb acting, he made the male lead bent.

Even Until Death, the Scum Gong Thought I Was a White Lotus (Novel)

Xie Mu’s task was to make scum gongs fall in love with him. He skillfully disguised himself as a white lotus, delicate and pitiful, kind and naïve. Even if he became an existence thrown away by the slag gong like a cheap pair of shoes, it didn’t matter, because Xie Mu would quickly make him kneel and apologize, even willing to dig out his heart and present it on a silver platter. —and once the slag gongs fell in love, he would, step by step, lead them into hell.

【You will encounter gongs in different worlds with different temperaments and different emotions. They are fine and loyal dogs. You are superior in appearance, they will love you at first sight, willing to sacrifice all, but soon they will get bored, betray, cheat. You are vengeful, and want to take revenge on that slag gong】The thieves are caught, and those slag gongs take for granted that because Qin Mu loves them, he will choose to forgive them. However Qin Mu, who is cold to the bones, only smokes a cigarette and expresses his deep love to a new lover. “Beauty, I want to be with you.”

I Have a Secret (Novel)

Huang Dan’s sensation of pain is innately different from ordinary people. The littlest tear in his skin can cause him to sweat all over his body in pain, to the point where he is unable to say a word. Somehow, he began to cross through different worlds, following Mr. System to complete tasks… In the first world, Huang Dan realizes what it means to be in such pain as to die, live, and die again.

The Marshals Want to Get Divorced (Novel)

After the fall of the Galactic Federation, long-time lovers Lu Li and Xie Jianwei defeated the alien invaders, and formed the Empire with Lu Li as marshal. Everyone thought that all was well between them, but. Xie Jianwei one day found out that Lu Li’s personality had split into several parts. They were all individuals, yet still the same Lu Li. How could Xie Jianwei bear to watch as each Lu Li plot to kill the other? Xie Jianwei used his SSS-class spiritual strength to enter Lu Li’s inner world, where Lu Li was god/director/actor all in one. To get to the bottom of the mystery, Xie Jianwei had to act along Lu Li’s delusions, else the dreamworld would collapse, worsening Lu Li’s condition, and split the personalities even further.