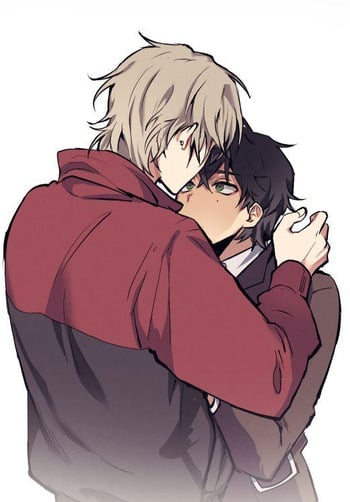 This might be in the gray area between Yaoi and Shonen-ai. There is no sex, nor anything even approaching sex, so calling it Yaoi feels a bit off. But there is kissing, so it's not purely emotional fluff like many Shonen-ai manga. Anyway, the premise is that there's a student rules enforcer at a school who stands at the front gate every morning giving other students demerits if they aren't following the uniform rules. Then one student comes by completely disregarding the very concept of a uniform and refuses to give feir name, kissing the rules enforcer instead. Every morning this happens.

Does this system of enforcement actually work this way? Because this feels like a very ineffective way to enforce rules, if it falls apart when somebody simply refuses to give their name. One would think that the rules enforcer would be given a yearbook with the pictures and names of all the students, so fe could track down those who don't comply. Or that fe'd be able to ask a teacher for the student's identity. There don't seem to be any other students with dyed hair, so it should be pretty obvious who this person is. Basically, my point is that the entire premise of this manhwa feels stupid.