Weathering With You - Recommendations 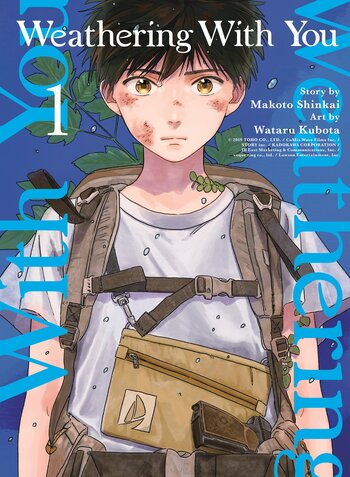 Words and music bridge the gap between Cherry, a boy who is terrible at communicating with other people, and Smile, a girl who hides behind a mask. They meet in a mundane suburban shopping mall in a provincial city. Cherry always wears headphones and puts the feelings he cannot utter into his hobby, Japanese haiku poems. Smile always wears a mask to conceal her large front teeth, for which she has dental braces. As a popular video star, she streams a video about seeking "cuteness."

Veteran novelist Mariko Koda lives with the families of both her son and her grandson in one house. Feeling like she no longer has any place in her home, she decides to leave the house and strike out on her own, beginning with living in a manga cafe in the city.

Thirty people sign up to take a one-way bus tour out of town and away from their everyday lives. Some dream of starting over, others are running away from their problems. The group's destination is Nanakimura, a village that urban legend claims is hidden deep in a mountain forest. The dream of creating their own utopia propels them forward, but the dream quickly turns into a nightmare when they discover the village is an abandoned wreck and the surrounding woods appear to be filled with monsters. People begin disappearing one by one, and the survivors are becoming increasingly unstable. What is the secret of Nanakimura? And will anyone manage to escape from the place alive?

The daily lives of a 15-year-old orphan and the 35-year-old lady novelist she ends up living with, and what happens when two polar opposite worlds try to -awkwardly- interact.

Manhwa creator Yeon-Sik Hong and his aspiring picture book author wife are stagnating in the bustle of Seoul. On the spur of the moment, they decide to rent a house on a mountain in the Jukyeop forest, and to get back to nature while being better able to concentrate on their work. With their three cats, they move out to near-total isolation and learn not only to appreciate nature and solitude, but also that sometimes the problem isn't where you are – it's what you've been telling yourself.

Suddenly, her life was turned upside-down... Kinaho lived alone until one day, her boyfriend Akito brought with him two young relatives: a pair of brothers who had just lost their parents. All at once, Kinaho finds herself living under one roof with not just Akito, but serious-to-a-fault eighth-grader Toma and innocent five-year-old Haruhi. As the days pass in confusion, this group starts to forge a new relationship: a family... or something like it.