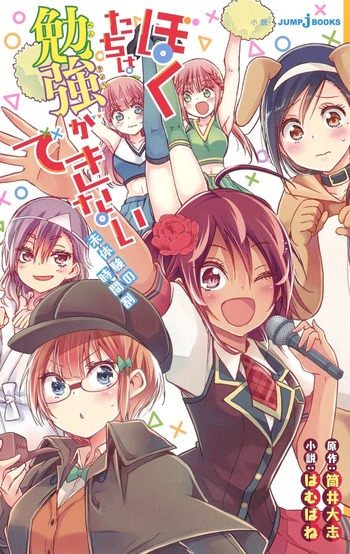 If you're looking for anime similar to We Never Learn: Mitaiken no Jikanwari (Light Novel), you might like these titles.

The Dangers in My Heart

Ichikawa Kyotaro, a boy barely clinging to the bottom rung of his school’s social ladder, secretly believes he’s the tortured lead in some psychological thriller. He spends his days dreaming up ways to disrupt his classmates’ peaceful lives and pining after Anna Yamada, the class idol. But Kyotaro’s not nearly the troubled teen he pretends to be...and it turns out Anna’s a bit odd herself!

The manga centers on Hana Tabata, a girl who constantly deprecates herself, considers herself ugly, and keeps only to herself. She spends her time taking care of the flowers that decorate her classroom — but is careful to do it only in the morning when nobody is around, as she is afraid of being laughed at for being an "uggo who takes care of pretty flowers." But one day, the class' most popular guy Ueno sees her taking care of the flowers.

With the new school year comes a new homeroom, new classmates, and a new desk for the timid Komura. But any trepidation he might've felt quickly dissipates when he catches sight of Mie, his new seat neighbor. Apt to quietly blurt out the most random things, the quirky Mie wears thick glasses that accentuate her lovely eyes, making Komura’s heart skip a beat! Unfortunately, Mie is pathologically forgetful and can never seem to remember to bring her glasses to class. It's not all bad, though! Her resulting squinty, mean-girl face sends Komura’s heart into overdrive too! While Komura is keen to help out and share his textbooks with Mie, will his heart give out from the almost daily strain of being up close and personal with his crush?!