Alt title: I am not the Heroine!? 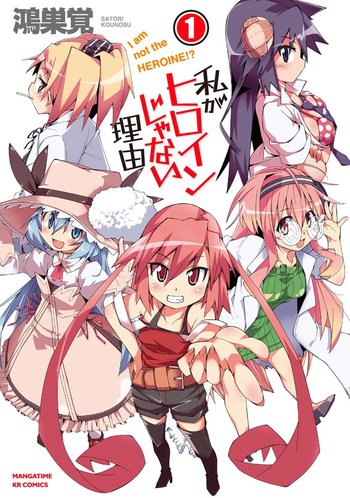 If you're looking for manga similar to Watashi ga Heroine ja Nai Riyuu, you might like these titles.

A high-school kid who’s a total loser throws up a lot. That’s about it. 25% of the manga is Juichi (the title is a pun on his name) throwing up or sneezing in full page spreads. It’s total madness.

Oneshots about Saki author Kobayashi Ritz, who revolutionized the world of mahjong manga with her mix of "moe" and "mahjong".

A story about a girl that's new to the job of working in a gaming place.

Shiro Kamiya, an ordinary boy, transfers into St. Kleio Academy, a school attended by the clones of many well-known figures.

What do you get when you mix absurdity, surrealism, and potty humor, and serve it on a bed of wicked satire? The answer is… What’s the Answer? That’s the answer! Each chapter begins with a set-up question. Then you turn the pages to find out not one, not two, but three three (or five, or sometimes seven) possible punch lines. Can you handle the alternative comic alternatives?

Horiuchi Yutaka-san is a popular idol, who isn't as glamorous and happy as her fans may think. Naturally, her next steps include a radio show, but one she isn't all too keen on doing. Although she tries her best to keep up her image, things quickly turn problematic. As she soon finds out, her voice is not hers alone.

Follow Fukuzou Moguro, a traveling salesman, and his current customer. Moguro deals in things that give his customers their heart's desire, and once his deals are made and their unhealthy desires are satisfied, Moguro's customers are often left with terrible repercussions, especially if they break the rules of his deals...