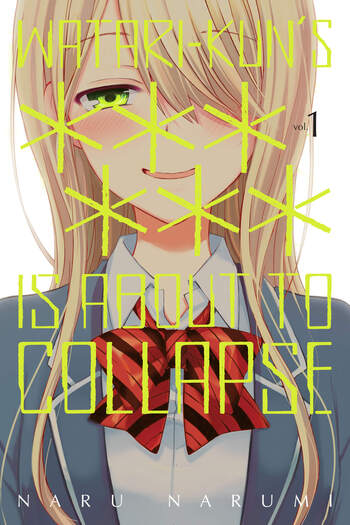 This review is up to Volume 5.

The start of the manga kinda hints towards a suspence, story. But for the most part it's just a quirky romance-drama manga. Our hero has a Girl he likes, Yukari, a childhood friend, Satsuki, whose interested in him, and a kohai, Makina, who has mixed feelings about the MC.

From this description it seems like just another crap, harem story. But to my surprise, the MC gets asked out by a girl -Can't name her mild Spoiler- and they start dating. This is where the manga gets intersting. but this also happens 2/3 of the way into Volume 4.

Before this crucial point the MC acts like a loner incel (Sorry I didnt know how to better describe this characterization), refusing to make any decisions himself. Trust me when you read it you will understand. So you have this meh trashy drama for the first 3 and a half volumes, and then it finnaly turns into a good love triangle-ish manga. Atleast it doesn't do that cheap thing where the MC never picks a girl, so the reader can imagine whatever ship they want, without having the Manga invalidate their fanfic.

It's a fun read, some really cute Waifu's its different enough from generic harem manga, that I can confidentl give it a sold 7/10.

I have a bad feeling for the ending of this manga, if that one cute girl gets dumped I WILL BE PISSED. and rate it lower.

But the fact that I am so invested in the ending, shows that there is something to this story that keeps you hooked.

The first couple chapters gives this ominous feeling, and the readers are put in a position to question the female leads motive. I really like mystery-thriller romance, for example the manhwa "olgami". After reading the first few chapters that's what i felt but after a couple more when it was the story of the 2nd female lead, it kinda ruined it for me. it made it feel like another rom-com manga, the MC and the first female lead had a good story about them and is very unique, so its very inconsistent to bring in an important character that doesnt add flavor to the existing plot. well instead of adding flavor, they added a new meal, which is bad for me because i liked the first premise, adding a love triangle just ruines the plot progression and made it longer without any good reason. Other than the MC and the first female lead, the other characters are boring and generic. We have the calculated 4 eyes best friend of the MC and the mediator for the MC and the 3 love interests, the high school popular crush (which is actually inlove with the MC), the sister who has a brother complex, explaining there character even sounds so generic. Also the MC's bestfriend although he serves as a mediator, he also has some mystery aspect to him, but that didnt saved him from being a boring character all around, he is very quiet, and is very uneventful, most generic romcoms the wingman or the bestfriend is a fun character or a little more interesting.

Although im bad mouthing it, its actually really good. Skip the fillers of other side characters and 2nd female lead and you'll actually like this more than you expect. I would have actually liked it more if i wasnt expecting a more focused mystery romance, than 70% romcom, 25% mystery and 5% siscon.

Also beware, there is a lot of weird things goin on with this manga, like a lot. The characters are weird on their own they have this underlying problems and trauma which is also make them more weirder and unreal the further you read. you could even argue the male lead is not weird because you're used to having this male character who is a wimp, i know that there is a huge otaku community in japan, but it gets tiring seeing MC like this, there are a lot of times where the mystery aspect could have been solved with one question alone, but he keeps trying to keep it to himself, like it would be weird asking it, which is NOT. Plus all the female leads are weird. first female lead is a yandere, practically obssesive but not entirely dangerous, 2nd female lead is kinda inconsistently weird, she hates normie guys because she feels like they are all the same and pervs, but practically buys a condom for the MC and her to use, even though they are not really dating (not weird on its own, highschool boys and girls buys condom naturaly), but its just inconsistent right, and very hypocritical of saying he liked the MC just because he is ddifferent but acting the same way as the guys do to her, well i put a spoiler warning so yeah i could say that she is actually also obssesive. 3rd female lead is also weird but im tired explaining so yeah pretty weird, feels like the author doesnt know how to be consistent with his characters. But i do get it, the author wanted to be different so instead of a normie harem romcom, he made all the female lead practically obssesive with the MC. so you got 3 different levels of yandere fighting over him.

55 chapters in and im utterly dissapointed with everything the author did, well not everything buy you know what i mean. A lot has happened since chapter 25'ish but at the same time it felt like nothing really progressed, we found out about the life of the first female lead, but at the same time it isnt really that exciting, it felt like the questions we have from reading chapter one didnt get answered the way we hoped it would be, well what i hoped. It is now entirely like your average school life romance manga, other than the female leads being weird and obssessed. so far i dropped it for now, i got irritated by numerous misunderstandings that piled up the story, and i was really getting turned off in how the characters act. I really liked this manga but right now im doubting if ill ever remember something from this manga after finishing it. The thing that makes it unique is now destryoed by the author for poor execution, the romance is not that sweet cause its kinda stem out from weird characters, and their dialouge felt like it came from most rom-com manga's, it just hard to differentiate this manga, after reading a lot i remembered a similar manga, "a couple of cockoos" which actually has most of the character tropes present and in itself felt like a copy of it, and just gone with a different approach but feels the same, what im trying to say here is that if you liked this manga you should just read "a couple of cockoos" the author their did a lot better.

Average looking Loner is nice to some good looking girls and they fall in love with him. At least that's my impression after the first 5 Volumes.

That's the basic premise of this Manga. Each character has it's own baggage to carry - for the proagonist it's his (sometiomes overly) obsession with his little sister.

Could be pretty much a visual novel because everyone help's the protagonist while he does nothing but fret about handling his sister and his desire to date a girl.

Seriously what's wrong with the girls in this manga? Lil' Kouhai is by far the most reasonable even though she is creepy sometimes.