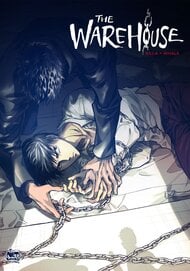 Dohyun grows himself a thick skin to survive this harsh, corrupt world. The future is dark though, and he wakes up in a warehouse in the middle of nowhere. Next thing he knows is a scar-faced kidnapper touching him and forcing him to remember, yet everyone has blurry faces in Dohyun’s memory. Measuring the thin line between love and obsession leaves them a bitter taste in the mouth, and they don’t know if they are going to be either saved, or ruined.

I wanna talk about a new manhwa I just finished reading. (Originally a webcomic) It's called "Warehouse" The plot is that a guy named Dohyun, 28 lives a normal, boring life where it seems he can't find happiness. He has little money and nothing going for him. Things only seem to get worse when he is kidnapped by a guy named Jungho, 28, who seems to hold a grudge from middle school of which Dohyun can't remember. He is taken to the old warehouse that is filled with memories from his past. In an act to get revenge, Jungho takes advantage of Dohyun and keeps him there for what seems like forever. But what I mean by taken advantage is RAPE Turns out, in the past, Dohyun had taken advantage of Jungho when they were just kids and tormented him until he went completely insane and dropped out of school. After about a month of this torture, Dohyun loses his mind as well and asks Dohyun to kill him. Jungho is mortified and, before he makes his decision, the warehouse gets invaded. Dohyun passes out and Jungho almost kills the two who invaded the area. Jungho takes him to his actual house and, when Dohyun wakes up, he is just an empty husk. He doesn't feel anything and doesn't wish to do anything anymore. Jungho breaks down and, they're both so lost and completely losing their minds, they end up falling in love with each other after their old memories fill their brain. It ends with Dohyun and Jungho recovering, they end up living together, and Dohyun gets a different job. The last scene is of them sleeping in a bed together, which is actually quite wholesome. So, overall, this was one of the most mixed series I've ever read. I don't really enjoy the rape scenes, but they're supposed to make you feel uncomfortable. But I wish there weren't so many. As for the characters, they didn't have many redeeming qualities. Dohyun is a self-entitled jerk who insults and hates almost everyone in his life. Jungho is a sexually charged, manipulative, crazy, a disgusting freak who only uses Dohyun to satisfy his lust and get revenge on him because of the past, even though it had happened more than 10 years ago. There were practically no minor characters besides a few that we see in the flashbacks. The art was incredibly good. The subtly in the expressions and even minor details like small spikes of hair and hollow backgrounds made it really nice to look at. The sex scenes, while not exactly enjoyable, were also well-drawn. There were even little hand gestures or positions the characters were in that really mixed well with the writing! My favorite part about the entire thing, however, would have to be the flashbacks or scenes from the past. They added up to the abuse that was happening in the present. They were quite wholesome and never went too far. Without telling the reader, they subtly show that these two characters had a sexual relationship when they were younger. It gives off a dark, yet also young and care-free vibe the whole way through them. My favorite chapters are the ones completely dedicated to them. The characters, Dohyun and Jungho, were actually much more reasonable and likable as kids (middle school). Their actions felt real and we get to see each of their sides. Both are confused and don't know how to handle the relationship, leading to misfortune and misunderstanding. My least favorite part would have to be the story in general. The plot sometimes strays away from itself, there are missing key points and sometimes points that are thrown in randomly. The ending isn't very good and doesn't make much sense. I actually had to re-read it a few times to understand what happened. It felt rushed like they wanted it to be over already. It also didn't make much sense how they fell in love again. Sure, they had a nice relationship as kids and they tried to figure it out as adults, but, before this, Dohyun absolutely hated him. He raped, sexually abused, physically abused, tied him, beat him, strangled him, almost starved him, and completely changed his state of mind, and yet they forgot about all of it within a few days and hooked up. I didn't like that and really took me out of it. I also don't understand Junghos' job. It's never described and always interrupts important plot-points in the story to be like "HEY YOUR JOB EXISTS! GET HERE NOW!" and he leaves. It leaves a sense of mystery, but not a good one. We also don't know who the hell the other two characters who invaded the warehouse are. They just appear so that the two main characters can switch to a new environment. I really hate their random, unexplained appearance. They say it's because Jungoho "stole their money". WHEN? They never explain it and it makes me frustrated. Also, just the fact the whole plot is based off Dohyun getting taken to a warehouse, Jungho tries to get him to remember the past, he doesn't, Jungho rapes him, he hates it, Dohyun gets tied up while Jungho leaves, he comes back, he tries to get Dohyun to remember, he tries to, only remembers a little but not enough, Jungho rapes him, he hates it, etc.. etc.. It gets old after a while and I don't even find it sexy or even feel a connection between the two. Overall, the story is pretty messy. So, in conclusion, I'd give the art a 10/10, the story 3/10, the characters 5/10, the side story/mystery 10/10, the writing 5/10, and the complete Manhwa BL "Warehouse" a 5.5/10. Pretty mediocre and wasn't exactly worth 67 chapters I wouldn't recommend it.

This has a slight similarity to killing stalking.  I love it so far , it kinda has you at a cliffhanger sometimes and if you're contemplating whether you should read this or not , you really should.

Dudes and dudettes before y'all torment your stable livelihood with countless rapes and sm plays be sure to wait for the character Joseph to appear as this sweetie will keep you sane for a brief period. Other than that, everyone else has their own fucking issues, a catcher-turned-pitcher whose obsessiveness towards the past drove him to do rapey shits as "revenge", a jaded nihilist whose reason for his existence is to survive by not giving two shits about trivial things (which ultimately serves as the basis for Warehouse's premise yay!), and a self-righteous prick with anger issues. Sense is only knocked in when the two main fucked and memories overlapped and that's how they develop and sort out their conflicted feelings. The end.