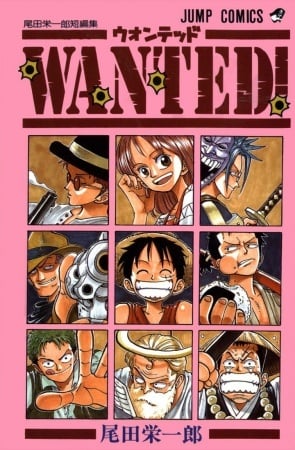 Lets make this short and sweet shall we.  Being a huge One Piece fan and hanging on to each and every chapter, I can say that I really enjoyed "Wanted!".  There's just that nice feeling about reading something from the mangaka's past.  One Piece as we know of, is in the top 3 mangas for Jump and is extremely popular.  But I beg the question, are the readers ever curious to as how he (Oda) started out?  We that's what "Wanted!" is all about. It is separated in 5 stories each depicting different "moods" Oda was in and different stories he felt like drawing.  The stories, to me, seemed to progress in detail as the 200 page short came to an end.  All his oneshots that he ever submitted are in here, along with his early ideas that evolved into One Piece.  Most of the characters in OP come from the roots in these short stories. As I was reading, I usually thought, "That guy is a total coward, Usopp", or "A sword and warrior spirit?......ZORO!".  It just clicked.  It would be my guess that if anyone stumbled onto this manga, they read One Piece. But if not, It was written early, so all his ideas were original.  To me, to come up with all these independant stories is just brilliant.  It's good to see what essentially never made the cut and how it helped Oda. It's just nice to see how the mangaka started out.  I mean, there was a time when he was not as good as he is today.  I've always been curious about it and for being nothing but a couple short stories, It's quite interesting!

Chapter Summaries 1: Gill the gunslinger has only killed in self-defense, but feir bounty keeps on growing which forces fem to continue to kill the bounty hunters who come after fem (of course, in self-defense). Fe's haunted by the ghost of someone fe killed, who will only dissipate if fe is able to accept feir loss or if Gill gets killed. 2: Bran the pickpocket doesn't seem to bring any value to the world, so God decides to kill fem by writing feir name in what amounts to a death note, but God mistakenly wrote in a typo and now a department store is fated to be destroyed by a meteorite. Bran is asked to help. 3: Gukou the monk isn't actually adept at exterminating monsters, so when a village asks fem to help out with a cannibal terrorizing their woods fe considers running away instead. There's also a guardian deity Gukou runs into in the local temple while on feir quest to find feir master. 4: Ryuma the samurai arrives at a town where Shirano is held up as a local hero and excellent swordsman who previously survived a dragon attack from several years ago. A dragon horn is blown and summons a dragon to the town. 5: Luffy the pirate encounters a bad pirate in the process of capturing the last living roc, named Balloon. And after seeing this pirate's cruelty against Balloon's best friend Anne, fe decides to help fem fight back. General Notes The art has several good images and the fight sequencing is often appealing, but there are enough shoddy and simplistic drawings that I think the score I gave it is deserved. The best chapters are the ones about Bran and about Ryuma. They both have interesting and self-contained plotlines and don't feel as shallow as some of the others. The story involving Luffy is the second incarnation of "Romance Dawn," the prototype for One Piece. Like the first version, this one also includes the idea of Peace Mains and Morganeers as distinct types of pirates (i.e. good pirates and bad pirates), which was a bad idea.

The Wanted! Tanpenshu is like its name implies, a collection of Eiichiro Oda's one shots/short stories before One Piece. If you're not a One Piece fan you probably won't find this worth reading, however, if you are a One Piece fan, the progression of the mangaka's art style and growth might prove interesting.  UH that up there was the review, this stuff down here is my thoughts as I was reading the tanpenshu so maybe you wouldn't want to read these.  Wanted!: Wow, the art style here doesn't look like Oda-sensei at all. This is really the art of the previous era, the sharp pointed features, the I don't know it just feels old. IT FEELS LIKE YU YU HAKUSHO. It has the same spirity plotline, the bad, unlogical plot flow, it even has the same humor. The main characters also have the same attitude. I'm not a big fan of the Wild West theme; I'm glad this didn't become serialized. Also there was minimal background, not as bad as Bleach, but not as detailed as normal. God's Present for the Future: I liked the trick at the end! It reminds me of how Nami pickpokected everyone in Orange Town at the end of the Arlong Arc. This was actually pretty interesting. Again, the humor was similar to Yu Yu Hakusho in my opinion, and the main character had the same personality. The art got a bit different, a little bit more round, there was a lot more background in this piece.  Ikki Yako: I would actually want to read this if it had become serialized. The main character really looks like Zoro. It had a good outcome and good potential to be a long story I feel. The character art got a lot better from the days of wanted, their attire is more detailed and their facial structure looks close to One Piece. Or at least close to Zoro. The storyline felt like something that could have come out of One Piece; the shocking coincidences that capture everyone's hearts and make the villain that much more villain.  Monsters: I swear all the main characters look like Zoro. The story line of this story really reminds me of the Arlong Arc. One thing I really like about One Piece is its story and particularly how Oda makes all of his stories so tragic. Unlike other manga like Bleach (lol it's not like I hate Bleach or anything its just so bad now, I really liked it before, I promise), where the goal of the arc is saving the world, saving soul society, saving Rukia and stuff like that; the story goals of One Piece are more "these guys are doing bad things and hurting people so we have to save them". I like how the Strawhats come into towns just looking to stock up on supplies but end up getting drawn into the island's problems. I just feel like there's a distinction between "have to save the world" and "I want to save these people". In Monsters I felt the "I want to save these people feeling", this is exemplified by the fact that Ryuma was framed, and the whole town hated him and he had no obligation to help the citizens but he did it anyway because it was the right thing to do. Also the art when Ryuma cut the dragon was so Zoro, even the blood splatters are the same. Also!! One Piece reference!! This is the owner of the legendary sword of Wano country - the sword that Zoro has now ^_^.  Romance Dawn: Omg the art here is so One Piece. I like how Oda manages to make Luffy look like rubber, maybe not "like rubber" but once you know he ate the Gomu Gomu no Mi, he looks like he's made of rubber (you know that rounded arm kind of look like Popeye). LOL "Your beak made a hole in my boat. Don't move, I plugged up the hole with your butt." This is Oda's humor. I like how Garp still has the same personality, however omg views of pirate life so different. He was a pirate? and he actually wanted Luffy to become a pirate?? AND LUFFY SAID HE DIDN'T WANT TO BECOME A PIRATE?? I'm glad they took out the "Morganeers" and "Peace Mates" concept, I like how it is now, it feels more realistic when everyone is a pirate and you don't know who is good or bad, you just know that there are good pirates and bad pirates yeah this is more realistic. wow in this story Luffy got his straw hat from Garp, I like how he got it from Shanks better. 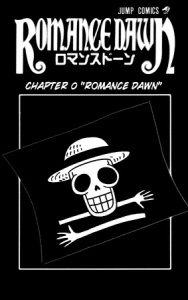 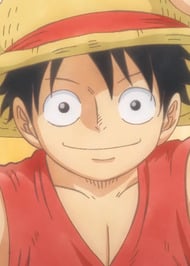