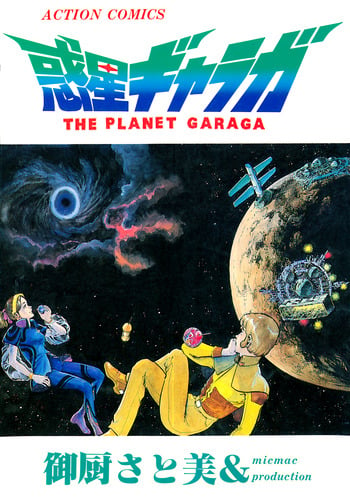 Right off the bat, it needs to be said that this story ends with a cliffhanger and the promise of a "Part 2" which never materialized. It's incomplete.

For what we do have, I really like the artwork. And I appreciated their creative, "scientific" explanation for warp travel: When three (artifically created) blackholes are forced to orbit each other in a ring, they create a gate which spaceships can use to warp. The plot feels like standard sci-fi type fare--a spaceship crew is stranded on a planet and must find a way to survive and hopefully eventually find a way back to civilization. There are talking robots and an insect-ape alien race which is in the middle of a power struggle with the Dreamers.

Kuro Frax is an easy-going pilot who was a last minute replacement on this trip, joining the crew because he got the hots for one of the passengers, a girl named Yan Heran. Will his one-sided crush eventually be reciprocated? Will they be able to survive against the hostile aliens trying to capture and kill them? What other mysteries does this planet hold?