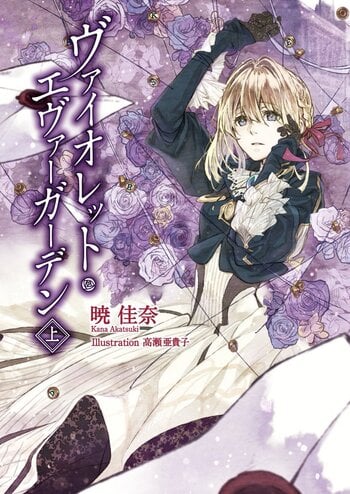 16-year-old Kizuna stalks the city at night, flirting with middle-aged salary men and coercing them out of their money. The thrill should be enough to satiate her, but Kizuna remains unsatisfied with her everyday life… That is, until the beautiful Inoue Yuki, also living in “Birdcage Manor” approaches Kizuna with a job proposition- to model in the nude for Yuki’s cousin, a painter and fellow resident Yusei Asai!

Shut away in his room, the reclusive Jun only manages to find entertainment by ordering bizarre items from the Internet and returning them before the grace period ends. One day he receives a mysterious suitcase that contains a beautifully crafted doll, and upon winding it up Jun is astounded to find that not only does she talk but also he has the ‘honor' of becoming her servant! The doll is called Shinku and she is the fifth of the Rozen Maiden - a group of seven legendary dolls who just happen to be involved in a battle with each other. This fight is known as the Alice game; the single victorious doll shall earn the right to become Alice and stay by their creator's side. While hesitant to fight, Shinku recruits Jun as her medium, and together the two begin to learn to battle side by side. However, they'll have their work cut out for them, as the first Rozen Maiden, Suigintou, is hell-bent on becoming Alice...

On his twentieth birthday, a man is sent back in time to when he was the age of ten. Intending to repeat the same choices and actions he had made in the past, he discovers that things don't always play out according to expectations.

Yuichi is a teenage boy who was diagnosed with hepatitis; and as staying at the hospital is boring, he often sneaks out at night to hang out with his friends. However, each time he is caught by the slightly sadistic nurse Akiko, he just prolongs his stay at the hospital. After his most recent escape, instead of striking a punch or kick at Yuichi, Akiko says that she'll overlook his sneak outs if he becomes friends with 17-year-old Rika, another hospital resident. Rika doesn't open up to him at first, but she has her reasons: she has a weak heart; and though she may come off as selfish and rude, Yuichi looks beyond the surface to help both of them enjoy what life has to offer.

Jun, now a university student, is working at a bookstore and finds an unaddressed copy of the first issue of a weekly magazine "How to Make a Girl", containing a spring. He brings it home, and soon starts receiving further issues of the magazine by post, each issue having one part of a doll's body as a gift. One day, after putting much effort into assembling the fifth Rozen Maiden doll Shinku, he receives a notification that the publication has been cancelled, leaving him with an incomplete doll. Suddenly, he receives a mysterious text message from his old number, claiming to be the Jun Sakurada asking for help against the seventh Rozen Maiden doll Kirakisho...

In the future, Utopia has finally been achieved thanks to medical nanotechnology and a powerful ethic of social welfare and mutual consideration. This perfect world isn't that perfect though, and three young girls stand up to totalitarian kindness and super-medicine by attempting suicide via starvation. It doesn't work, but one of the girls, Tuan Kirie, grows up to be a member of the World Health Organization. As a crisis threatens the harmony of the new world, Tuan rediscovers another member of her suicide pact, and together they must help save the planet...from itself.

The war on terror exploded, literally, the day Sarajevo was destroyed by a homemade nuclear device. The leading democracies transformed into total surveillance states, and the developing world has drowned under a wave of genocides. The mysterious American John Paul seems to be behind the collapse of the world system, and it’s up to intelligence agent Clavis Shepherd to track John Paul across the wreckage of civilizations, and to find the true heart of darkness—a genocidal organ.