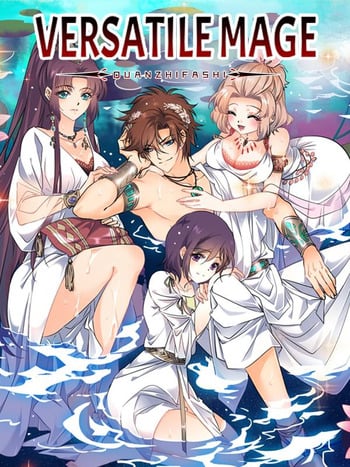 Both are similar story type. Solo is more gamer type and the other is similar to leveling up but no game system. If you like Solo you may find this interesting.

Both about a guy who had nothing going for them turned into cool OP character. Solo levelling is more ruthless but both are good

This manga is the best because the MC is weak at the beginning but after some time hi gots the power that surpasses even others.

because it good spicy meatballs.

While Solo is an isekai, Versatile has the same feeling to it. Both have interesting mc, both are drawn really well (with Solo being a bit better in my opinion) and I really enjoy their stories.

Both are characters that were mocked for being useless and then when they show their power the others around them are shocked. Also they both have a ability unique to them, Mo fan has innate duel elements and sung Jin woo has the shadow monarch title and the ability to summon the shadows. They also are both in a way weak to strong because they both have to train to get better.

I read both and they have their own ways of making the mc to be develobed, both storys are enjoyable. you will like them.

both are almost the same but versatile mage is a bit different in the game aspect.while soslo leveling focuses on a more gaming aspect, versatile mage is more of a magical community and stuff. both of them include leveling up tho.

Magicians use elements such as ice, fire, wind, earth, light, and darkness to project miracles in the magic world while chef masters use their magical culinary skills to play with people's tastes...Nathaniel, a powerful magician can control ice and fire whose true identity is...a cook? What kind of delicate dish can he make to impress the nobles in Snow City? Is he coming to this city simply for cultivating his cooking skills or he having other intentions?

The second season of The Magic Chef of Ice and Fire.

His mother kidnapped by the Ice God Pagoda at a young age, Nian Bing grew up travelling with his father, avoiding pursuit. One fateful day, he was forever separated from both his parents and inherited two immortal treasures from them, the Ice and Snow Goddess’ Stone and the Flame God’s stone, allowing him to use ice and fire magic in harmony, a feat unheard of. Taken in by a former chef of legends, once known as the Demon Chef, he creates legendary cuisine while walking the path of vengeance!