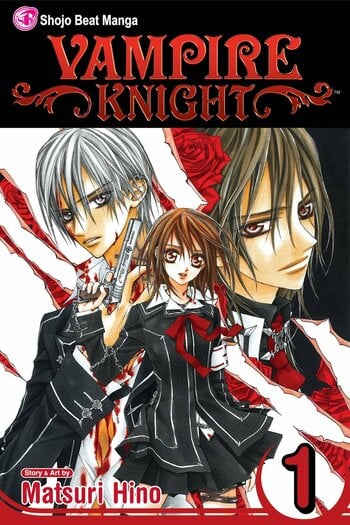 IF YOU THINK THE ANIME WAS GOOD/BAD, THEN READ THIS!!! ITS SOOOOOOOO MUCH BETTER..... LIKE ON ANOTHER LEVEL!!!

let me start off with this. If you're a sucker for happy endings and you hate tragedies like me AVOID THIS MANGA!!!!

Thats said, this was one of the most beautiful, painful, well-authored mangas that I have ever read..... Its beyond spectatular with the love triangle and the development of the characters and relationships between them. I've been reading this manga one chapter/one volume at a time since middle school (in college now) and I finally picked it up again and finished it all the way through. The mangaka had me straight up sobbing at the end and..... honestly i dont have words rn for how i feel about this beyond a rollercoaster of emotions that im feeling rn. So if you dont mind some sadness, pick this up and check it out because you wont be dissapointed.

Vampire Knight is a great series in my opinion. The story is very deep and attention grabbing. The anime does well to follow the plot of the manga. The art is beautiful and many of the characters have a story behind them. Even though the story may be hard to follow at times, the morals and story come across clearly enough to enjoy the series. The ending of the manga is a bit unsatisfying though. I may be biased by my preferred ship, but the final chapter felt like a cliffhanger. Yuuki and most of the other main characters didn't seem to change throughout the series either. Kaname continues to be the mysterious being, zero is constantly in pain, and Yuuki maintains her cheerful and energetic persona. Kaname's intentions seemed a bit unclear to me and there was never any real resolution to the main problem of the entire series (conflict between vampires and humans).  Many of the series mysteries were also left unsolved. If you plan on reading this series, be prepared for a......strange or uncomfortable ending. All this aside, I still encourage you to read the series.

Vampire knight is a fantastic manga and its an anime but the manga is on going but no ones sure if the anime will continue but i here it might be fingers crossed. first off we have yuuki who is in love with kaneme-sempai and then we have hints that zero might be in love with yuuki. Their are twists and turns that make you indulge yourself into this manga you will not, i repeat will not be able to put this one down, plus theirs vampires and vampire hunters who dosent love vampires? the art is well drawn and all the characters are hot not anything you could say bad about this manga of course that is my opinion

Vampire Knight is overall a very good manga. Characters were created very carefully and the story was interesting. This is the kind of a manga that you want to read in one day. I put a 7 to the story, because from chapter 50 and on it was quite complicated to understand the development and it started presenting unnecessary details and events. Generally I recomend this manga to those who seek a romance genre with supernatural elements.

This is just a review of what I think, so none of that summary stuff, and there are probably going to be spoilers in this so prepare your eyeballs!

I have a love/hate relationship with this manga, which I will discuss here, sort of:

It is absolutely gorgeous. Just, wow. The eyes are of a style all their own, very large glassy looking mirrors full of color (at least when there are color spreads, ha) and stylishly drawn uniforms. I don't think I've ever encountered a panel in the manga where I thought "Well, that's awkwardly drawn" whihc you can find sometimes if the angle is off or the artist flubs up anatomy. Only thing conspicuously missing would be nipples on the guys when they're shirtless and it's pretty easy to spot if there's a large panel devoted to their torso, but details details (important ones though!)

It's simple enough, a little mystery and some unrequited love but once Yuuki is turned back into a vampire that's when it all goes to hell. How? Everyone starts speaking cryptically and "poetically". It's so over-the-top that I had long since stopped trying to understand what the hell they were saying. I don't know if it's simply the translation and how the words are put together syntax-wise or grammatically but reading their thoughts and dialogues quickly started giving me a headache. It was really pushing the conflicted feelings of Yuuki towards Kaname and Zero, and the "psychological" aspect felt really MPD Psycho to me in that you don't know what the hell is happening but you still want to read because you hope that hopefully in a future chapter they'll reiterate those thoughts in simpler terms or analogies. Rarely was that the case.

There is also a lot of back-and-forth on Yuuki's part between Kaname and Zero. Personally I believe that Zero deserves her love and respect much more than Kaname. Man, this is a big parallel to Twilight, isn't it?

Yuuki's sudden shift from happy-go-lucky, enthusiastic and a bit whiny girl to a very pensive and oh-so-delicately woeful and remorseful (and yet at the same time not) pureblood vampire was so..What? Wait, what?

Like I mentioned in the story chunk above, her interactions with Zero after becoming a vampire are very confusing. It's almost like they're saying words that technically mean what they say but at the same time they're NOT saying it. Again, it could just be the translators' attempts to uphold the poetic and gothic run-around kind of speech that this situation and genre supposedly "needs" but it's kind of painful when I can't get any more clarity of the situation whether it's from fan translators or the official English volume translations. Pretty sad. So sad in fact that I actually went on the manga's wiki page and read the synopsis of the last 20 chapters to even begin to decipher what was happening.

That's where I hate it. I hate that it's not spelled out. I've read other manga where it was psychological and conflicted but it didn't beat around the bush and it didn't use flowery language and analogies or implication to "illustrate" shit.

The supporting cast is a bit flat and does their part but the story really revolves around Yuuki, Zero, and Kaname, and Kaien Cross and Ichiru and a few of the hunters do admittedly have a bit of personality, though I really couldn't care less about Kaien, AT ALL. Of the supporting cast, Aidou becomes prominent in his own way as well as Ichijou and Shiki (the latter kind of indirectly since his body was being used by his father).

Maybe it's because of my Asperger's and I can't intuitively "see" relationships, and maybe this story is actually a wonderful piece of work in that regard about a multi-layered love triangle, but for me I just can't see it.

Overall: Matsuri Hino is a phenomenal artist, one of the best I've seen in any genre of manga ever, no joke (well, for the manga's plot and content it's the best). Her characters are okay but at times repeat themselves over and over and seem to be voice boxes for some poem-vomit to really sell the "tragic" story. This story is full of angst, but not the typical angst. Still, it gets a bit annoying at times. But that's just me. I will reiterate that maybe I don't have the mindset to TRULY enjoy this manga but I enjoyed it while it wasn't as complicated in the beginning and for the art.