Uzaki-chan Wants to Hang Out! - Reviews 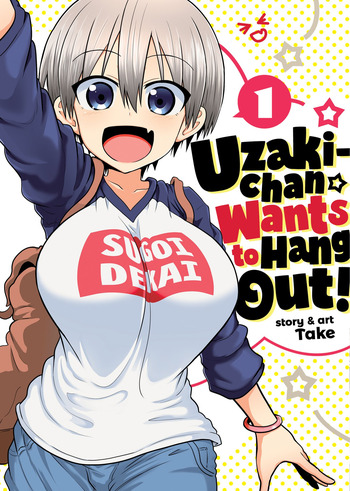 Amazing, light-hearted, warm romcom. I prefer light, funny, goofy stories. Uzaki-chan wa Asobitai perfectly blends romance with a light atmosphere. I love all the characters and their development within the storyline. Perfect for taking your mind off the nonsense in the world.

Overall, there is very little worthwhile about this manga. Especially in the beginning, there is minimal connective tissue between chapters and they largely act as standalone scenes showing off the pre-dating interplay between the two main characters. Sakurai will often prioritize personal convenience or playing video games over socializing with others. Fe's athletic and good-looking (even though fe has a bit of a scary face) and can also be very polite and considerate. Uzaki is feir short kouhai with boobs so big they rest on tabletops when fe's sitting. Fe's inconsiderate, intrusive, and a bit sadistic--fe enjoys pushing femself into Sakurai's life and seeing fem squirm. Ami is Sakurai's coworker who, along with feir father and Sakaki, enjoys watching the main couple's awkward dynamic and tries to push them together. This group of people trying to push them together are reflections of how the author wants us readers to be reacting to the main couple. But the problem is that their sentiments don't actually always reflect how readers will react. For example, in chapter twenty, this group acts as though the main couple is super unpredictable and that it's very exciting just waiting to see what they'll do next. The author probably wishes that were the case, but at least for me, they actually are more often generic and predictable. Which is why I rate the manga so low.

In fact, for the first 23 chapters, I would rate it even lower--as a 2/10. But then in chapter 24, something changes: we are introduced to Uzaki's mom, Tsuki, and feir misunderstandings about what's going on. Throughout the manga, there are several instances of them saying things in such a way that it can lead to misunderstandings, but previously no one really took the misunderstandings to heart so they had much less comedic value. But I definitely enjoyed the ongoing jokes involving Tsuki and it looks like they're going to expand this joke to involve the father, Fuji, also missing information. Other than that, the only scenes I actually found funny were the hedge scene in chapter 6 and the headshots in chapter 36.