Uzaki-chan Wants to Hang Out! - Recommendations 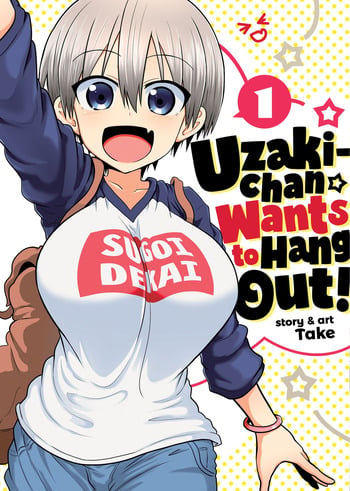 If you're looking for manga similar to Uzaki-chan Wants to Hang Out!, you might like these titles.

Mischievous Nagatoro-san always bugs Senpai to get a reaction out of him. What is her motivation? Does she just want to create misery for Senpai? Or maybe she secretly likes him?

Both are about loner senpais whose daily routines are disturbed by their impossibly cute but also annoying kouhais who love nothing more than to tease the boys the secretly have crushes on.

Broken into short segments and featuring both slapstick, clever jokes and sexual misunderstandings that play off the reactions of the two lovable leads who clumsily compete with each other in a “will they won’t they” struggle of sexual tension and tender moments.

Keito Sudou is handsome, capable, from a good family, and living a good life. Obviously, he's never had trouble with women, either. With crowds of friends who can't leave him alone, he's thoroughly enjoying his life on campus. ......And yet, teasing his older classmate, Shouta Kishi (who has trouble talking to others), has become part of Keito's daily routine...... Just what is he doing!?

In her university life, Lady Ayane has begun to keep bad company, or so it seems when the butler, Shinobayashi, is tasked to investigate the truth. As Shinobayashi tails her in secret, what he finds is that the lady is inappropriately playing alone…?!

Ao-chan's delusions of H explodes because her fathers a sensual novelist. Although it is a kiss end with my lover's wooden mallet, I will stay in the same apartment in Fukuoka at the same time as entering university! At last when I thought that our indecent days would begin... Ao-chan's mother appeared!?

Beautiful college student, Yonomori, is secretly enamored by his underclassman, Hinohara. He’s a really cocky junior, but sometimes, Hinohara touches him as if he were a precious jewel and makes his days full of heart-wrenching hope. And on one of those days, he is shocked to learn that Hinohara has a person he likes. Even while being plagued with hesitation, Yonomori goes to Hinohara to inquire about the identity of that person. But in exchange for an answer, Yonomori is to become...?

A cute story about a couple and their dates.

Follows a girl who's really good at acting, and the senpai she likes.

Usami Nao and Doubayashi Kazuma who had a secret relationship with each other. The two broke up due to a slight quarrel, but after three months, Doubayashi still can't give up his feelings. Doubayashi makes an effort to regain himself by reflecting on his past mistakes and changing himself. That feeling would be transmitted to Usami for a while, but as a result of Doubayashi's persistent attack, the distance between the two began to gradually shrink. However, it seems that Yuuki, a refreshingly handsome guy in the company, is also aiming for Usami...! ?

He looks like a gorilla man, but on the inside Yukio is a decent guy who fell in love with an upperclassman named Akane-san! But is she actually a lesbian who engages in "compensated dating"?!