Under the Cherry Blossoms - Recommendations 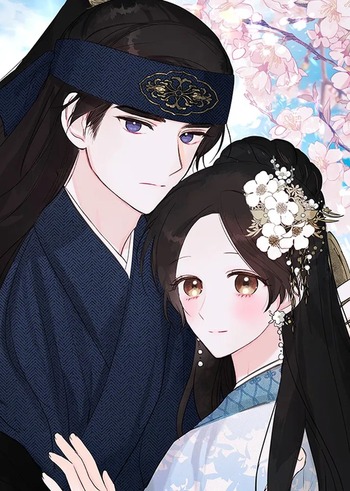 Lovers of the Red Sky

As a child, Sasha Laurent lost her parents overnight when the Dochen Republic invaded and burned her hometown, Neroi. Fleeing across the border, she lived off the streets until rescued by General Gerard of the Allied Forces. A decade later, when he asks her to infiltrate Dochen as a secret agent, she has no choice but to comply, but soon finds herself a prisoner at the mercy of Major General Johann von Willendorf. Sasha’s unhealthy obsession with Johann veers dangerously close to love, but will her feelings change when he makes her a double agent?

Kim Sohye's life changed after being chosen as the empress. Unfortunately, Shoye's life after marriage is not exactly happy. The king who previously had a concubine doesn't love her and always insulted her. The concubine turned out to have evil intentions to the king. But, slowly but surely the king begins to feel the empress's sincere heart. The feeling of their love began to grow like a flower in bloom. How does their story continue? Will the empress be strong and fight the king's concubines?

There is a saying in the imperial palace of the Yin Dynasty, "If you see the princess in the palace, you must avoid her!" Although this princess has amazing beauty, she is jealous and poisonous, and she has tortured countless people, gaining her notoriety. But the imperial concubine's unscrupulous evildoings are for only one goal: to hear the emperor confess his love and make her the queen! Faced with such a woman, how will the emperor parry?

"Where am I? What... am I?" Gold Armored Sword Dragon, the boss monster of Demon Palace's 7th floor and the Guardian of the Abyss, becomes self-aware and awakens in a game world! Gold Armored Sword Dragon (or Geum-gab Do-Ryong) is a giant dragon covered in golden scales, but he takes on a human form once he withstands a set number of attacks. He's a rare character in the game, "New Legend of Mir", a supposedly authentic martial arts game. Dorothy, the girl who call him "Geum Ryong" (Gold Dragon)... Jeok Chan-Woon, the attack force's leader and commander of the Red Blood Group... and Gepetto, who goes by the nickname, "Dumplinghead Girl"... Their story takes place inside the world of Murim within the virtual-reality martial arts game, "New Legend of Mir"!

Seung-ah, who works for the Cosmetics company, recently participated in the Hotel Amenity contest held at the Seojin Hotel as a team project but failed to make it out of the preliminaries. Seung-ah and her co-workers who worked very hard in this contest came in an agreement to meet the officials of Seojin Hotel. Somehow, when they found out that there was something between Seung-ah and Seo Jin-hyung, the successor of Seojin Hotel, during the time at their university, they all counted on her.

4 Ways to Get a Wife

An absurd public courtship gifted by a former lover (?)! A benevolent courtship battle between a man who needs a suitable woman and a woman chosen as a substitute! "I don't do marriage. Living together? That's not bad." Kim Gun-hyung is a man who has 'marriage phobia' beyond non-marriage due to the influence of his parents who broke up after only hurting each other. The only flaw he has is that he is an illegitimate child. It wasn't enough to make him an illegitimate child, but his father, who threw him into a chaebol that was reminiscent of a safari full of wild beasts everywhere, was still a very irresponsible person, leaving him a huge legacy.

Sword of the Falcon

Rescued from a band of human traffickers, Eremia, the continent's most renowned traveling musician, meets Rajid Shan, the ruler of Istania. Soon, fate brings Eremia into the palace and she's forced to serve as his royal musician. They bond over their shared love of Istania's lore, but the threat of a devastating war looms on the horizon. Will Eremia be forced to watch the nation burn, as history repeats itself? And will Rajid realize that even a caged songbird longs to be free?

A young man called jawoon, barely survived his escape with the help of ahin. Before he was sure of his feelings for her, ahin left the country in a hurry due to her ailing health. Years later, jawoon is handpicked to join the imperial guard and protect the king, while ahin recovers and returns to Korea. At the same time, a mysterious and elusive thief appears in the capital...