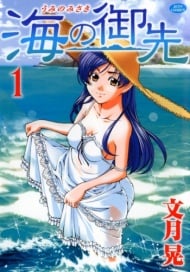 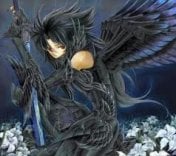 Umi no misaki is the best harem manga that I have read because unlike other manga this on you can't tell who the guy is going for. Also, it gets better at the right time. All you need to do is read the first five chapter, and you will be hook.

There we are, umi no misaki, one of the best romance manga ever written. Open polygamy, god tier characters development, excellent original and mysterious story. The story is based on the believes and the mythology of the island. It makes everything refreshing and realistic. In this manga, you wont have the cliche plots of slice of life romance and harem. The story is serious, mature, well paced, cute and to enhance everything, there is a LITTLE touch of drama on the last chapters. I can only say this much to avoid spoiling the interesting story. The characters is the point where I can put everything. MC is not tense, he's open about his feelings, carefree and he's not stupid. He's the opposite of the MC that you can see in almost every shounen romance without being the perfect tall, handsome, muscular and mysterious cliche man found in shoujo. He's very realistic. Shizuku is joyful and smart. She's probably the first girl to fall in love with MC. She's the most attached girl to the believes of the island. There is so much to say but it will be spoiling her character development. Karin, the neighboor of the MC, she's one of the best tsundere I have ever seen. She started being the classical tsundere but the author didnt stretch everything for 100 chapters. She IS NOT the stupid tsundere that will punch MC during 100 chapters. She will quickly fall in love and become adorable, that is the good word. She's the least attached girl to the believes of the island (the total opposite of Shizuku on this point). Soyogi, like Karin, starts the story as a cliche girl from harem. She's the cold type that only thinks about her duties ans she practices kendo. She has, obviously, no fucking clue about relationship and it will leads to an extraordinary character development with the growth of her love. Once again there is soo much to say but it would spoil the story... The secondary characters are just necesary. No useless garbage characters added to fill the world. The only useless characters here are rare and present only in 2 panels maximum. The teacher will push MC during his relationship with girl and will give "external" tips to MC. By external, I mean that she's from abroad like MC, she has not been raised with the island's believes. She will be of a great help throughout the story and at the end. Rinne, Karin's sister will always root for the MC. She's bound with the story (no explanation because it would spoil) and she will give a great help at the end because of her knowledge (knowledge bound with the story, when reading you will understand) Keiko, teacher's friend. She appears far in the manga so I wont say much about her but she will HUGELY improve the character development of MC and his feelings and she will hugely improve Shizuku's development. Overall, this story is probably the best romance I have even read. It's a real mature seinen and not a fake seinen with shounen features like you can find many. It's the best character development I have ever seen, all the girls are litteraly as enjoyable and likable. The romance plot is truly a lesson, 99% of the authors that write harem should learn from umi no misaki. The story is constantly good and straight. The word "useless" is not on author's vocabulary. No useless characters, no useless chapters, no useless drama, no useless filler. It's a must read.

Umi no misaki is one few great harem manga that I have read. It stands out because you can cheer for all the girls in this Manga and See why they like the Protagonist, and most of the manga is from their perspective of him nor just a bunch of misunderstanding scence. Also, the Ecchi and the extras coming in at the perfect time to complement the Show. It's Long thou shorter than most Harem Manga but Worth it. (All you need to do is read the first 3 chapters, and you will be hooked).