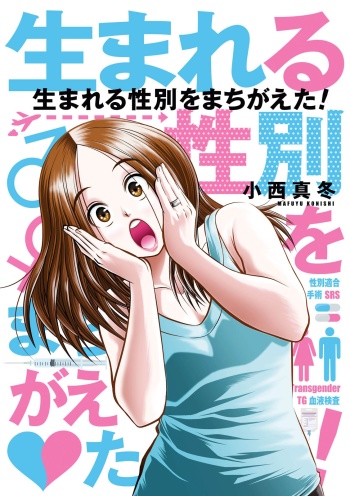 The Bride was a Boy

Drawn in the style of diary comics with an upbeat, adorable flair, this is a charming tale about Chii, a woman assigned male at birth. Her story starts with her childhood and follows the ups and downs of exploring her sexuality, gender, and transition–as well as falling in love with a man who's head over heels for her. Now they want to get married, so Chii's about to embark on a new adventure: becoming a bride!

Both of these series are informative autobiographies about trans women with some really charming leads. The difference between the two is that The Bride was a Boy focuses on the author's life in general while Umareru Seibetsu wo Machigaeta, for the most part, is about the author's sex reassignment surgery and it's written in a lot of detail. Both manga are really good reads if you want to know more about transgender issues but I would say that The Bride was a Boy is a better introduction for someone who knows nothing about transgender people.

Koike, having come to Tokyo for a job, finds herself renting space in a share house and meeting Makimura. Makimura Asako, former Miss Japan finalist and TV personality, comes out to her housemates and they just sort of all get over themselves.

Comic essays on the gay industry and LGBT issues by Mochigi, who first worked in the industry as a gay prostitute in Shinjuku Ni-chome, Tokyo, and has since worked in gay bars and gay videos.

Jibun no Karada wo Yurusu made