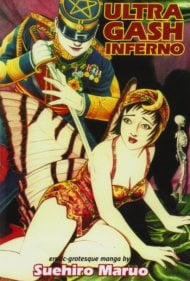 With influences ranging from 19th century atrocity prints to the Sex Pistols, and obsessions with horror, scatology and human freaks, Maruo has taken the "erotic-grotesque" (ero-guro) style of manga, a unique fusion of sex and violence to its ultimate extreme. Ultra-Gash Inferno is the ultimate compendium of Suehiro Maruo's most shocking and graphically precise work, containing nine psycho-nightmares never before translated and published in English.

276 users are tracking this. Log in to see stats.

Please note that this manga has been tagged as "mature" for a reason: there is some really gross stuff in it. This review will also contain spoilers. "Dee dee dee, the train goes screech... We are black sunlight, a vortex of anal sweat in the suckling sky" - from Sewer Boy Paradise The above quote might be one of the best to introduce you to the hellish ride that is Ultra Gash Inferno, a collection of short stories with names as Night Putrid, Shit soup, Sewer boy and The great masturbator. They're all grotesque stories about people licking eyeballs, sucking a cow's eye out of a vagina, eating a worm that was just shat out... and just the plain eating shit and drinking piss, as well as some cannibalism. Oh, and then I almost forgot to mention the guy who had sex with his grandma and masturbated with her false teeth after her death, as well as a story about a rotting fetus ...  So yeah, if you're already thinking of puking by just reading my description, you shouldn't even think of starting this (unless you like puking, of course). Story: The stories aren't much to speak of, as they're just collections of the greatest amount of gross stuff the author could fit in. Or at least it felt that way for me. Characters: The characters also aren't very memorable, since the only thing you'll remember is how gross this all is. The most memorable of all will forever be the huge snail that got "Heil Hitler" as a greeting when it appeared. They also aren't always very well worked out.  Art: The art, on the other hand, was a little bit too good for this kind of manga: I really didn't have to see such well-drawn pieces of shits. Which I mean literally, of course.  Overall: You should only read this if you're really fond of grotesque, gross, weird stuff. I wouldn't recommend this one to anyone I don't really hate. People who actually like being grossed out or have a high tolerance for this kind of things might like it, but I sure as hell didn't.  1.5/10, I wish I could unsee some things.

Let me start by talking about the chapters that I most liked, which are chapters 1, 6, and 8. What these chapters have in common is that they have a clear narrative structure with solid endings and with very little trippy weirdness. Obviously, they are still filled with grotesque gore and offputting sex acts, but those aspects seemed to fit well within the plotlines (and they are also to be expected from this genre). Chapter six was somewhat nonsensical in some of its transitions, but its superb ending made me smile (and nearly laugh). Chapter eight likewise had a very humorous ending. I think the biggest problem with the other chapters is that their storylines are a lot weaker (other than, I guess, chapter nine). They rely on the gross-out effect and don't even bother to make sense half the time. Like, the chronology of chapters two and three are wonky. There's some psychedelic stuff in chapters three, four, and nine. And there's just sudden, random fucking in chapters five and seven. There are some recurring ideas and motifs throughout the chapters. There's a reference to the "cosmic gash" in one chapter and to "the sun's cock" in another chapter. We see streams of laughter emanating out of people's mouths multiple times. Eye-licking shows up in three stories (ch. 1, 4, 5). And male characters with a single eye, often wearing an eyepatch, show up in the majority of the stories. There are also multiple instances of people eating gross things (like shit or tapeworms) or licking wounds. Weird things are placed in vaginas. As a whole, this series achieves its goal of having repulsive moments that will probably etch themselves permanently into my mind. It does have more mediocre and bad chapters than good ones, but even the bad chapters have some value in that they fulfill a vibespace. And the good chapters are impressively solid additions to the guro genre, so I think a 6/10 is fair. You'll notice that I've marked the Story, Art, and Characters as all less than that though, and that's because a large part of the value of this series doesn't come from the Story, Art, or Characters per se.