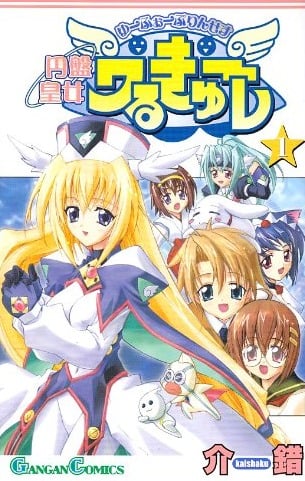 There are wedding bells in the air for Nobuyuki and Rea, meaning the Masaki household is about to get a whole lot livelier! The guest list is teeming with family members from Jurai and friends from all over the known galaxy, all wanting to see Nobuyuki and his bride. While Ryoko and Ayeka bond over having little to do with the family, Minaho sets her sights on her nephew Tenchi. Meanwhile, Airi is stuck at the GXP Academy, working overtime to finish her paperwork in time for the ceremony. However, as the day draws near, a more pressing matter begins to arise - who exactly is Rea, and where did the blushing bride come from?

Yuki’s first day at Saint Hoshikawa School turns out to be eventful: not only is the school attacked by aliens, she loses her strawberry panties in the process! In an attempt to retrieve them, Yuki helps defeat the alien – thus piquing the interest of the secret organization G-On Riders. Wearing special glasses that unleash their inner powers, these select girls work hard to deflect the constant alien attacks on Earth; and now, they want Yuki to join them! Meanwhile, mumbling Ichiro happens across Yuki’s panties, and tries to return them. Will he be able to carry out his task and confess his growing love to Yuki, or will the space invaders ruin his dreams by over-running the G-On Riders and Earth?

Hazuho's at it again! Mizuho's voluptuous mother is back, and she's making trouble again, putting the moves on hapless Kei. How serious is she? Serious enough to take him to a "love hotel"! How will Mizuho take it? How will Ichigo and Herikawa react? And what other couple is getting hot and heavy?