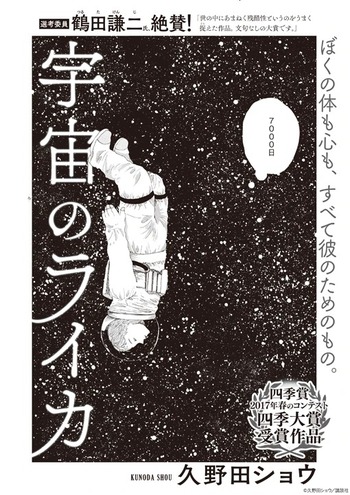 It's the year 2038, and Yuuma Sawatari is a typical space-loving elementary school student. When his parents buy him a robot named Nanako he's thrilled, although his excitement soon turns to disappointment upon the discovery that this machine is nothing more than a housekeeping robot Or is it? When Nanako's system crashes, something incredible happens... it's taken over by an entity claiming to be marooned alien ship that needs Yuuma's help to return to space!

Former mountain climbers Goro Saruwatari and Jack "Lostman" Woodbridge have labored long and hard for their dream of going into space. Now, each through their own means, they've finally achieved that goal. Now they set their sights on the moon.

After discovering an element on the moon that, when used to create a nuclear reaction, would power the Earth for the next 1,000 years, the leaders of sixteen countries declared that their space programs would be combined into the International Space Agency (ISA) – and fifteen nuclear reactors would be built on the moon by the year 2023. Lostman and Goro are two young climbers who have conquered the highest point on Earth – Mt. Everest – and now look to the skies for their next challenge: to become astronauts and explore the stars. While Goro becomes a construction specialist, Lostman joins the air force; both will work their hardest to make their way into space, by whatever means necessary.

Mutta Namba’s ambitions are at a disappointing standstill when his brother, Hibito, is selected to train for a coveted NASA space mission — an appointment that sets in motion events that take the brothers to the crossroads of destiny and dreams.

When Asumi was just a baby, a space shuttle accident changed her life, and the lives of the townspeople of Yuigahama, forever. As a young woman, the spirited Asumi has only one desire: to someday travel to the stars in a rocket, with her father and ghostly friend Lion-san along for the ride. With heartache, happiness, and plenty of determination, Asumi and dozens of talented teenagers now face the greatest challenge of their lives: the test to enter a prestigious space academy, so that they may one day reach out and touch the stars...

The anime depicts an original story before Kaho arrives, when Yuki and Natsu have just met in Okinawa.

Team Rabbits returns with even more mecha and combat action. Their leader, Izuru, has fallen into a coma following critical injuries he sustained in a fierce battle with his sworn enemy, Jiart. Now Asagi steps up to command Team Rabbits, but does he have what it takes to live up to his brother Izuru's legacy? There's no time for second-guessing as Asagai and Team Rabbits take the ultimate stand against a terrifying new enemy, the likes of which they've never faced.

In the future, humanity has extended its reach into space; and to help future generations adapt to the new environment, special children are genetically engineered and trained. But when the alien Wulgaru army invades the solar system, mankind is forced to use these evolved youngsters as soldiers on the battlefront. Izuru, Toshikazu, Tamaki, Kei and Ataru are a group of such soldiers who, due to their consistently terrible grades and bumbling maneuvers, are referred to as the “Failure 5”. That is, until they’re called upon by the Global Defense Force to pilot special mecha to combat the threat. Now, can the gang grow as a team and protect the human race against such a fierce foe?