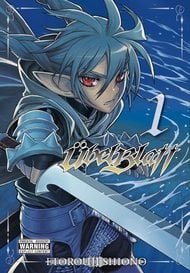 Übel Blatt started out promising but ended in a literal burning mess... The story seems to be influenced by Berserk...a lot, expect betrayal, revenge, violence, rape and fantasy monsters. But somewhere in the middle of the story Übel Blatt seemed to ditch the adventure story to focus on war. And this is where you start to lose grip on the story. It becomes messy, hard to follow as there are constant explosions and battles. And the more you go towards the end the less is being explained and the story becomes less coherent. Magically monsters and weapons appear out of nowhere without ever seen it before. And Koinzell/Ascheritt constantly switches between mortally wounded and being kick ass cool/strong. Berserk suffers the same fate of wounded protagonists but Koinzell's wound have even less impact as he can get right back up within seconds when the story needs too. And once you read the final volumes the story becomes more and more rushed. Overall this was a fun read at the start but kind of a choir to go through the second half. Still an okay read just because of the first half. If you want something better, I suggest you try out Berserk instead.... even though that manga will never end.

This started off as a mixed bag, and around the halfway mark it got worse. I think that this started off as something really special. I don't mean the first few chapters—they're fine, I guess—but the creator's vision for the series as a whole. The core plot of betrayal and revenge and regret obviously came first, and when that's the focus of the action, everything is good—the characterization, the plotting, even the art. (More on why in a minute.) But the creator also added all this political intrigue, which is at best okay, and a larger plot that is the focus of the last third or so, which stinks. And the ending (a) came out of left field, (b) didn't include any of the character-arc payoff we were expecting, and (c) was incredibly rushed. I think that by the last volume of the series, the creator must've been as sick of this story as I was. That brings me to the characterization. Again, when the focus is that core narrative of betrayal and revenge, it's pretty solid. The villains are a bit too villainous—and it's never explained how they can get away with being so nakedly corrupt when the emperor is (eventually) portrayed as being wise, perceptive, and active—but it's not awful. But as soon as we get away from the betrayal/revenge narrative, and particularly as the revenge plot fades into the background and the Big Bad's evil scheme takes over, that changes. The villains get dumber and more blatantly evil. Everyone starts holding the Idiot Ball at once. People change their allegiance without adequate explanation. Ichfeis goes from being a cold-blooded opportunist to the biggest, dumbest idealist in the series. But what really sinks this series, IMO, is the art. For the most part it's competently executed, but there are some pretty bad panels that seem to show a difficulty with perspective. And for a manga that focuses so much on swordplay, there's basically no effort at depicting the swordplay itself, and no variety whatsoever to how the fights get resolved. They almost invariably go like this: (1) a few panels of sword clanging on sword, (2) Koinzell (or whichever good guy is fighting) gets a cut diagonally across his left shoulder, which never so much as inconveniences him, and (3) Koinzell ends the fight using one of his two magic sword moves. At that point, either the enemy is dead (yay, hero wins!) or the enemy is still standing, in which case Koinzell collapses and is saved by the intervention of some other character.  All of that got the art down to about a 6. But I docked another two points for some really egregious pedo fanservice. There are a lot of naked women in this manga, and there's a fair bit of sex. Fine. Whatever. Not my thing, but I won't complain about it. But there is a young girl whose sole reason for existing, as far as I can tell, is to appeal to perverts. Her combat attire would make perfect sense as lingerie. At one point she forges a sword wearing heavy protective gloves and a bikini bottom. Absolutely ridiculous. Another young girl wears an armored thong into battle. This doesn't just offend my sensibilities. It also makes it impossible to take Ubel Blatt seriously. (By the way, this is what I meant when I said the art is better in the revenge-focused bits: The revenge story doesn't involve any young girls, so the author doesn't have any opportunities to put lolicon smut in those bits.)  Bottom line: Not hopelessly incompetent, and even had some good points, but overall a big disappointment.

A beautiful tale of a betrayed hero. It's clearly inspired by a number of other works, most notably Berserk, and to some extent, Dune. I quite thoroughly enjoyed it. Story; Our Main Character was once a renowned hero, but after being betrayed by his closest friends on what was to be their finest quest, he was cut down, left for dead, and branded a traitor. Only by absorbing the power of a fairy was he able to survive, and even then it took him twenty years to recover enough strength to make the trek back to his homeland and seek revenge on those traitorous friends who call themselves "Heroes". As we follow his story, we come to learn more about his homeland, the quest he partook in, and the inner politics of the Empire in the ensuing twenty years since the Heroes were granted lordship over the provinces. We follow the Main Character's journey as he single-mindedly pursues his goal unflinchingly, yet as he stays steady and persistent, the world's perception of him changes; he goes from being an unknown demihuman, to a reviled villain known as "Hero Slayer", to a spark of rebellion, and finally to a beacon of hope for the entire country. I found this narrative immensely satisfying (if a bit slow at the start), simply because it's rare and enjoyable to find a tale where the development surrounding the Main Character is more about the world around him than his own growth. I was also very intrigued and impressed by the writing of the nebulous "Wischtech", the antagonistic force that spurred on that original Heroic quest and drove many of the sub-plot elements; the author did a great job showing *just enough* to give context, but witholding everything else to leave them mysterious. 9/10; I felt like the intro could've used a little work, but the rest is solid. Art; Absolutely beatiful. I was impressed throughout my reading. While I can't say it's better than some of the iconic "Greats" out there, it certainly deserves full marks. The character designs were really nice, the backgrounds had insane detail on many panels, and overall the feel of it all was top notch. 10/10; Those sword-shaped cannons were gorgeous. Characters; This work was very much a character-driven story, and as such this category falls into a very similar area as the Story category. Moving around the MC's character that I've already talked about, I was really amused by the side characters of the story. This work does a great job of sidestepping the traditional problems of having side-characters that tag along with the MC just end up being a glorified peanut gallery, or at best just mooks to get jobbed by the next baddie the MC has to take on. Instead, each "follower" character, if you will, has their own story arc of an indeterminate length, and once that story arc is complete, they are no longer in-focus. We get glimpses of them from time to time, and they provide support in relevant situations, but they don't cling to the MC for no good reason, and they don't drone on about their own abilities for pages at a time. 9/10; My favorite part of it all was that there was a side character that the MC just gives a fake name at their first encounter to cover for them, and since the character never bothered to argue, the entire cast called her that name for the rest of the story - we never even find out what her real name was. Overall; A sublime example of dark fantasy with its own unique aesthetic that helps it stand out amongst the others. It succeceds in creating a grim world full of corruption and abuse of power without sinking into the teritory of "edgy for the sake of being edgy". I don't think I could ever call this my favorite Dark Fantasy work (that spot's already claimed by Berserk), but I will certainly remember this manga fondly for a long time. If I ever get to a point in life where I can collect physical copies of Manga I've read, this will be one of them. 10/10; Well worth the read in every way.