Alt title: The Tsundere Detective Wants to Kill the Policeman. 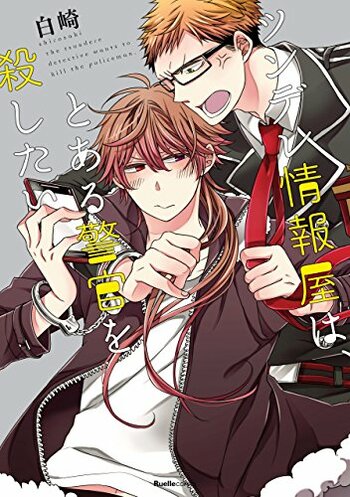 If you're looking for manga similar to Tsundere Jouhouya wa, toaru Keikan wo Koroshitai, you might like these titles.

Police officer Ahane is exasperated when he is assigned to guard Prince Laronne, a young exiled prince who has no regard for his own safety. However, his frustration turns to horror when he discovers the infatuated prince is more interested in using him as a personal escort!

While rural high schooler Satsuki is in the middle of beating up some local punks...a mysterious man, Hosumi, who's even stronger than him, appears and takes him down! Terrified, he obeys Hosumi's orders and follows him...back to Hosumi's own house...!? Despite being questioned, he can't wrap his brain around what's happening. Who on earth is this guy...!!?

Meet Renji Jumonji, outstanding police officer and commander of the Special Investigation Unit. His one regret in life? Neglecting Daisuke, who was orphaned when his father, Renji’s best friend, passed away. Thus, when Daisuke joins that very same unit, Renji vows to protect him at all costs. And protect him he must, from the roving hands of colleague Kamioka. But when it comes down to it, can Renji protect Daisuke from his own desires...? Renji's new-found life is full of hardship!

In the Dark (Novel)

Xie Lanshan was an undercover drug enforcement officer who made his way inside the Golden Triangle's most feared armed organization as the right-hand man of drug lord Mu Kun. After successfully returning to his post from the operation, an accidental case of police misconduct triggered a series of unexplainable headaches and hidden memories that began haunting him. While investigating the truth behind his father's death many years ago, Xie Lanshan utilizes his unique and sharp thinking from the perspective of a psychotic murderer to solve difficult cases around him. Plagued by this growing change and instability of both his mental health and personality, he will later meet a mysterious forensic sketch artist named Shen Liufei. Together, the two men will maintain a strange relationship; as friends and enemies, they solve mysterious cases one by one. But, perhaps, there was another motive for the forensic artist to approach the young officer...

They are not compatible, but somehow they became partners. A handsome and flustered guy asks, "What? Who says two good-looking guys can't appreciate each other? We are also going to develop feelings for each other..." "You want to solve cases with psychology?" "Someone who only knows how to solve things with their fists like an animal." A SWAT officer bites his ear lightly and says, "Do you want to know how animals do it?"

See You at the Crosswalk

“You’re under arrest!” On his first official assignment, police officer Jinho thinks he catches a flasher... only it’s the suave school nurse, Hwanung! One chance encounter quickly develops into something more as Jinho finds himself both excited and flustered by Hwanung’s gestures of affection.

Detective Nogo Taichirou is now in a big bind as he enters the home of one of his main suspects, Satou Ayato, and the bottom of his body begins to react. But above all, next to him was a baby?! Being the result of your research... But more importantly, from who is the baby named Fumita ...?!

Lu Lanqiao, a forensic science student, became the most likely suspect in the murder of his elder brother overnight. His brother's last words put him on the run. While trying to find out who killed his brother, Lanqiao met Fu Cheng, the police inspector who was hot on his trail. However, the relationship between the fugitive and the pursuer gradually changed…