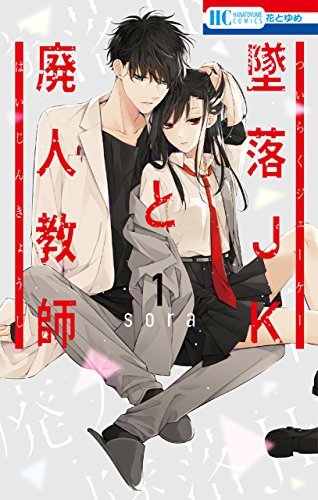 If you're looking for manga similar to Tsuiraku JK to Haijin Kyoushi, you might like these titles.

Because of their parent's remarriage, high school student Satou Yuka, suddenly finds herself living together with her stepbrother, 23-year-old high school teacher Satou Taichi. Actually, their parents have not registered their marrriage and therefore they aren't even siblings by law; but since both parents aren't around, they end up living together! Taichi who has a very serious case of sister complex, wishes for Yuka to call him "onii-chan". But Yuka's reaction is very cold?

They both share the sensei and jk relationshio part and they are both romantic comedy even though tsuira jk can be a bit on the dark comedy side.

Nakano-san is a high school girl who can look into people's minds. Because of that, she finds out that the mind of the popular Toda-kun is full of wild fantasies about her!

The only similar parts about these two very different Mangas is the fact that the male lead is all about the female lead. This manga is more of a slow burn romantic gag comic seeing how the characters backstories aren't as deep as the ones in jk to haijin and the chapters are just one pave but you can get a loooot out of the one page. Overall - still a cute read if you wanna read something that's not so serious but has the same kinda vibe as the male lead in jk to haijin

Fumi Oono, second-year high school student. Stuck with the debts of her father, she needs a job—fast. While she did indeed manage to find one as a housekeeper for THE Akatsuki Kibikino, it leaves much to be desired. After all, the novelist has a mean glare and an even worse attitude…And on top of that, she has to live with him?!

These two are of my all time favourite romance manga with no problematic situations or misunderstandings except for some, but I'll let these slide as they are done well.. Both have age gap too..

A sweet and comfy Teacher/Student romance.

Both are age gap student_teacher relationship that rely more on comedy than romance.. Both are really adorable and not toxic or weird relationships..

Sensei, please teach me about love. Senou Miku is a normal high-school girl. On the day that she had her first boyfriend, her mother had a job transfer. And then, her guardian, who came to live with her, turned out to be her homeroom teacher, Nishizono-sensei...

Haruka Sakurai is the substitute English teacher who takes over after Yuni Kurugi's homeroom teacher goes on maternity leave, and genius-girl Yuni loves the way he looks—but she hates his flashy attitude. Thanks to that, her English grades have plummeted (everything else she has a perfect score on)! Now she has to take extra lessons with him after school, where she discovers Sakurai's gentler side … ?!

High school teacher, Ayai Tsurugi feels uncomfortable around one of his students, Endou Kanaga. One day, after school, the two of them end up getting trapped in the teacher's lounge, and Ayai realizes that his feelings for her is "love"...!?

Centers on the romance between two people whose meeting seems to be both fate and an accident.

Minato Sakura. High school first year. Riding up the hill looking at sakura, a really nice teacher chases after the view. Sakura can't seem to get that image out of her mind...!?