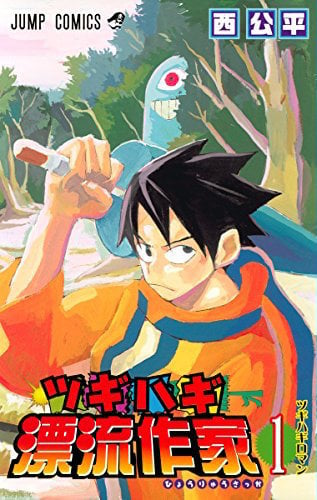 One Piece Special 1: Adventure in the Ocean's Navel

One peaceful day, Luffy and his crew happen upon an old treasure chest which holds a skull with a message: ‘Plunge into the Ocean’s navel; therein lies the secret to making your dreams come true…’ Intrigued by the note, Nami, Sanji and Usopp are lowered into the abyss to explore – and hopefully snag some treasure - but they get more than they bargained for when they are attacked by a giant octopus! Meanwhile, Luffy and Zoro are swept away to a derelict town that is plagued by giant sea creatures. They soon learn of the notorious Captain Joke, a man who broke the seal on a nearby mountain and brought forth the wrath of God. Intent on repaying the villagers in exchange for a free meal, Luffy and Zoro head to the mountain hoping to defeat the monsters and free the village of its curse. However, as each beast’s defeat aids Captain Joke’s resurrection, Luffy and the gang may have bitten off more than they can chew!

When Nami suddenly comes down with a fever, Luffy and the crew immediately set out to find a doctor. They soon arrive at Winter Island, a freezing land where the snow never melts - and they receive a rather frosty reception. Unfortunately after the cruel king Wapol escaped the island following a pirate attack, he took all the doctors with him; now the only physician left lives atop the mountain, and there’s no way of contacting her! Deciding that Nami can’t wait, Luffy and Sanji set out to find Dr. Kureha; though when Wapol and his brother Mushul return to the island in order to claim back the land, the Straw Hat pirates find that they aren’t the only ones trying to reach the summit. With the help of a mysterious talking reindeer named Chopper, Luffy and that gang must try to save the entire island from Wapol’s cruel plans. Also, having taken an instant liking to him, can Luffy persuade Chopper to become his comrade and join the crew of the Thousand Sunny?

Thousands of years ago, in 11th century BC, an eminent conflict brews between the immortals in the heavens and demons who dwell on the earth. Zhou, the wise ruler of the Yin Dynasty of humanity, has been put under a spell by the evil Dakki and his empire is slowly starving to death. Unable to sit by idly, the immortal sages task the brash Taikoubou with vanquishing the souls of 365 demons, including Dakki. Together with his trusty beast and a powerful weapon bestowed upon him by his teacher, Taikoubou reluctantly sets forth to complete his task, helping others, finding new companions and sealing away enemies along the way.

Fifty years ago, the Demon Stone and RAVE (two powerful artifacts) are broken and scattered throughout the world. The story follows the journey of Haru Glory; during his travels he meets many new friends and allies, and also enemies known as the Daemon Card. He will have to use the powers given to him by RAVE to defeat the Daemon Card and find the other pieces of RAVE.