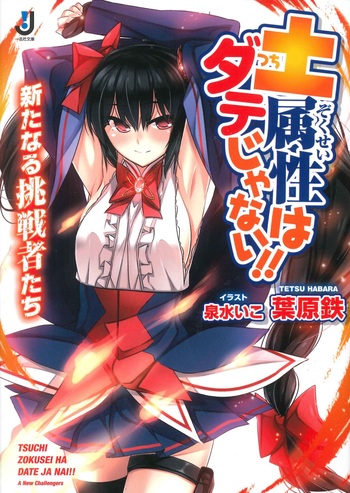 If you're looking for anime similar to Tsuchi Zokusei wa Date ja Nai!! Arata naru Chousensha-tachi (Light Novel), you might like these titles.

Q-Tarou is a mischief maker who likes to fly around scaring people and stealing food, though he is deathly afraid of dogs.

Does the new girl in Riki Naoe's life need his help, or is she actually trying to kill him? After a chance encounter on a rooftop brings the enigmatic Saya Tokido into the Little Busters' world, the only thing that's certain is that trouble is sure to follow. As if saving the lives of his teammates wasn't enough of a task to handle, now Riki must also untangle a web of new mysteries that seem to be rooted in his own personal past! Who are the Dark Executives, why do they want to keep Saya and Riki apart, and what is the nature of the secret treasure that Saya seeks? Sometimes, answers lead to even more questions as Riki and the Little Busters discover that they weren't the only people drawn into Kyousuke's artificial world in LITTLE BUSTERS! EX!

Nube gets a new student called Jun Kagami, a shy boy who has just transferred to Doumori Elementary School. Due to his insecurities, Jun believes that his only friend is a mysterious clown entity that lives inside mirrors. It is up to Nube to find out the true nature of this clown.

Hell Teacher Nube: Summer Holiday of Fear! Legend of the Sea of Suspicion

When Nube and his class arrive at a small island to carry out beach activities, they heard a forbodding tale from an old man residing on the island. Legend has it that there is a creature known as the sea spider in the open seas around the island. When the creature is past 200 years old, it will turn into a monster and devour humans to satisfy its appetite. However, curiosity kills the cat and Yukime decides to pursue the authenticity of the legend. And then, a girl suddenly appears on the beach. Possessed with a strange charm, she immediately attracts Hiroshi's attention and overcomes him. Soon later, strange things start to happen to the others whereby Kyoko and Ritsuko-sensei got attacked under strange circumstances. The true identity behind the mysterious girl is questioned and the legend behind the sea creature seems to be true after all.