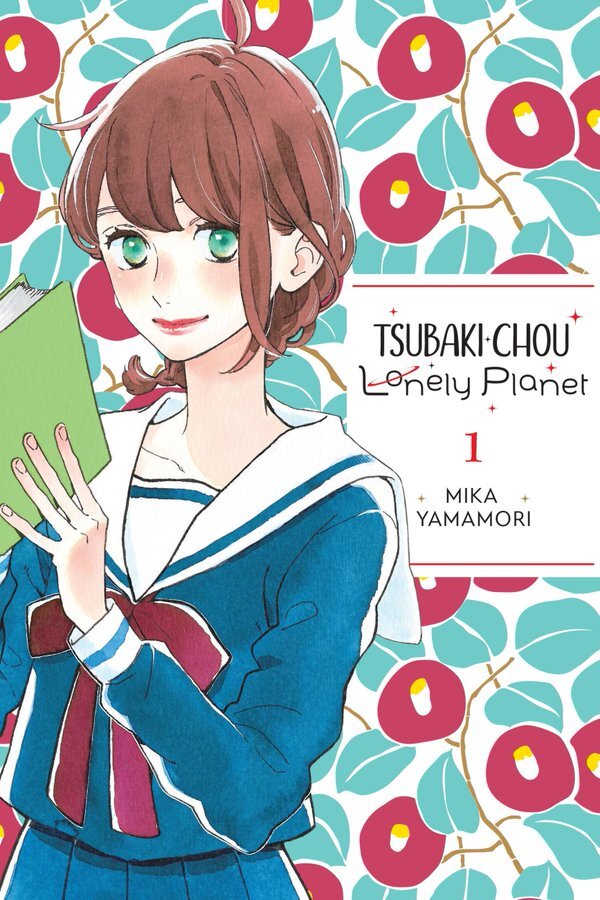 Shiharu is a high-school student who loves kids, lives in an orphanage, and works at a daycare... Until the handsome uncle of two-year-old twins offers her a raise if she'll be their babysitter. Often relying on memories of her mother's actions for guidance, Shiharu quickly finds herself falling in love with her new makeshift family.

Though TcLP has nothing to do with childcare, the relationship between the main guy and main girl have a similar feel. I think it has something to do with the girl being responsible for her age and the guy being almost perfect husband material.

I read both of these and LOVE THEM, So in Love So Life, and Lonely Planet, they both have younger female and older male. Both girls are trying to make their way through high school, while in Tsubaki-chou Lonely Planet, our protaginst is helping her father in debt. In love so life, both parents are already deceased and she is wanting to acheive her dream of being a day care helper. Both males act as support and can be seen as a bit soft at times, however in lonely planet, our lead male can come off as rude, and has a tougher time with romance than in Love so Life where the lead male mainly struggles due to the nature of the work like relationship.

They both have an older male and younger female romance. Also the girl works for the man and the guy is very lazy and untidy

They both sur round the plot of a school girl falling in love with a été acheté or adult they know or get to know, I really enjoyed both of them.

Kind of similar protagonistsd who end up living in a new place together with the guys thye usualluy end up falling for.  Both cute love stories!

Both have quite nice and cute characters.  Both art styles are also BOMB. lovin' it. if you liked one you will definitely like the other

Both mangas are created by the same artist, and have the same strong female character. They both realise they are falling slowly in love with an older guy who is close to them, and worries about them.

It has the very same feel of first love, and developing one's feelings and coming of age about them.

It also switches from time to time from the perspective of the female character to that of the male's.

the author truly made 2 master pieces in on teh ending ight make you feel uncomftorbale but fro the viewpoint of a teen it is the right one while the other will keep you on toes to know how theyll reach the happy ending that you know from chapter 1 they deserve .

The Girl and the Geek

Single with no regular job, Go Nanhee starts a new cleaning gig and meets Oh Deokhoo; literally the filthiest, NERDIEST guy she's ever seen! If that wasn't bad enough, his uber expensive action figure goes missing during her shift! Now she’s stuck cleaning his messy apartment in order to pay him back. Can a man who’s only ever seen a girl in games and a woman who only fawns over stars on TV… actually fall in love?

In Tsubaki-chou Lonely Planet she is working as a housekeeper to pay off debt. In The Girl and the Geek she just needs a job. Nevertheless, they both fall in love with their employer.

House of the Sun.

As a child, Mao spent all her time at Hiro’s house across the street. Going to his house always made her feel cheerful. A few years later, Mao’s father gets remarried and Mao finds herself with nowhere to call home. Hiro ends up letting her stay with him in the house he's been occupying alone since the death of his parents. A love story unfolds, between two childhood friends of different ages.

Both stories involve high school girls who for one reason or the other end up moving in with the male lead who looks out for them and takes care of them (at home and with other life troubles). There's also an age gap between the couples with the male leads being older than their female counterpart. Both romances are sweet and build up over time. Wholesome vibes from both stories.

The Lady and Her Butler

The last thing Sooha wants in her life is a man. She’s sick of her mother calling about boyfriend problems, of friends trying to set her up on dates, of girls waiting for their Prince Charming. But when a broke and homeless man offers to housekeep in exchange for temporary housing, Sooha finds herself saying yes to a man for the first time in her life. After all, who wouldn’t want to come home to warm homemade dinners, clean sheets, and freshly ironed clothes?

If you liked Lonely Planet or  the Lady and her Butler, you may like the other because it has similar themes. Both include a character struggling with finances and working in the house of their employers.

Mikoto Ochiai is ready to jump off the rooftop of her high school's building after she got rejected by the boy she loves. However, her physics and home room teacher Jin Haiba suddenly appears on the rooftop for a smoke, talked to her and saved her from falling down. He even asked her to go out with him which made her confused. How will things go between the smart and calm Mikoto and her seemingly carefree teacher Jin?

These two are of my all time favourite romance manga with no problematic situations or misunderstandings except for some, but I'll let these slide as they are done well.. Both have age gap too..

Eitoku High School Freshmen Ganya Sho and his classmate, Ryukawa Yuu, who is also a pretty boy, neither of them can stop quarreling with each other. However, Sho's twin sister has a crush on Ryukawa. A track runner and a film star. How will Sho and Yuu's friendship and dreams progress?

A guy who appears to be very laid-back, but is actually an unmoral, idiotic, and pervert! The president and vice-president who are teamed together to unmask the secret of the biggest event in a student's life! All sorts of embarrassing things can happen during the preparations for the Culture Festival!

Watari Maika has been in and out of hospital since she was little, and consequently missed out on most of her school life. Now about to start high school, she is determined to fit in with her new classmates and start from scratch with a high school debut, but manages only a short stay before she again falls ill and is forced to stay home. Six months pass before she is able to return, just in time to visit the cultural festival, and as she'd feared, none of her classmates remember her ever having been there - exept for a rather tall, pretty maid with long hair she does not recognize. Watari is delighted to have found someone who remembers her, and immediately pleads for friendship - and now Shun Momoi has missed the timing to let the girl he fell in love with at first sight know who he is out of uniform.