Trapped in a Dating Sim: The World of Otome Games is Tough for Mobs - Reviews 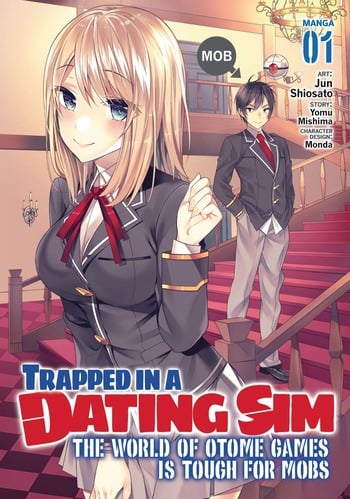 The story starts very boringly. But from the fight with the prince's group the story takes off. All the fighting in the wari n their robot sized fighting suits is great to read. There is a lot of comedy when the prince and his group does their actions stupidly. Finally I liked the story very much and it's a good read.

This manga man. I do have to say the main character carries hard in it but I'll explain later. Regarding the plot itself. It's pretty much an Isekai harem. You know, the basic stuff. But the diffrence between this one and a normal one is literally the main character. In most Isekai stories, the protaganist is used as a self insert for the reader. But in this one, the mc is too unique, where you couldn't see yourself being the protagonist unless you were a borderline psycho like he is. But him being a psycho just makes the story 100x better. Like this guy takes the phrase "Imma fuck your mom." To a whole nother level. Cause he actually gets the Queen to fall in love with him LOL. He is the peak of chads in Isekai manga. Next to Kazuma-Sama himself. Not to mention how crazily absurd the character development in the side characters are. It's actually crazy how good the character development is. Overall great story, but needs to update more.

A couple of months have passed since I originally wrote this review and holy shit I had to come back just to express more on how much of a fucking CHAD this protagonist is. I fucking love how he does what he wants and does what a normal human does. He gets beat to a pulp then asked by the same people to save them. "Don't wanna.". This guy is at the peak of all Isekai protagonist. Comparable to the guy from FFF-Class Trashhero. This manga is still going string after a couple months and I can't wait to see more chapters released.

In a semi-matriachal world (I say semi-matriarchal because even though women generally have more control over men, the person on the country's throne is still a man), a world of a video game, Leon uses feir knowledge from having played this video game in the real world to gain some autonomy and independence over feir own life. Fe was at risk of being married off to a middle-aged noble woman, but was able to prevent that. When fe goes to the academy, like all young men fe must host tea ceremonies for women to try to entice them to marry fem. And fe does do this, but largely because fe's awed by the tea skills of feir Master and wants to be able to do justice to tea in a similar fashion. < This is a pretty adorable aspect of the manga. Ideally, fe wants to be able to live independently and not have to kowtow to the demeaning traditional roles.

Leon befriends Olivia, a commoner in the noble's academy, as well as Angelica, the prince's jilted fiance. Fe is frenemies with feir sister and straight up enemies with Marie and feir lover-cronies. One of my favorite relationships is between Leon and Luxon, a robot/airship who's an ally of feirs but is very willing to mock fem. Currently, it seems like Marie will be an ongoing antagonist. And Leon will continue to rise in rank and influence. Nothing outstanding, but an enjoyable read.

I'll make it short for you. This novel had a badass beginning. It exceeded my expectations and few novels could compare to its development and script. Alas,

The Higher of expectations, the greater the downfall.

But READ THIS AT YOUR OWN RISK.

It's one of those types of novels where the Author destroys his own work. His own progress and characters in a nutshell.

No reader should have to go through sh*t like this. The amount of frustration or rage quit will probably be one of the strongest in your reading life in Light Novels.

(I won't spoil anything, the review or comment section on other sites says everything.)

Honestly dissapointed with this manga, the MC is not likable at all, 40 chapters in and instead of character development, he deteriorated.

First of all the story, the concept in it self is kinda new, but at the same time they dont really give enough emphasis on woman being more powerful, the only thing they say which fits the concept is most woman has slaves and that's mostly it. Even the shity manhua that is reccomended in this manga played better with the idea of woman being upper in society than this manga. Plus there are a lot of interferance when it comes to MC and his relationship with 2 of the current girls he is involved with. For starters the first focus was for the MC to have a wife, but the manga always disregards everything after that, we aint even close in developing his relationship, at this point the queen has better romantic development than the first 2 woman introduced including the "MC" in the game. Going back the concept of woman has higher status in this world is just stupidly placed, there are even no reason for it being that way. The reason men became of higher status in most standards including work, sports etc is that because men are in a way naturally stronger in terms of muscle development and personality, men are also has higher status in society because back in the early days men are the only ones who can be enrolled in schools. thus in modern society men are still looked upon on and woman are being disregarded in offic and being an athelete. But this manga shows how weak the woman are, there arent even woman fighting in this manga, they are just mean girls in school with slaves, also men are shown to be more intelligent than woman in this manga. Stupid right for a manga that depicts woman being higher status but at the same time woman here are nothing but sidetracks.

The Art is kinda ok, but the panels are sometimes hard to look at and the text speach most of the times are hard to figure who is saying which.

Characters are the weakest in this, there really is no character development in this manga "yet". again the MC is gowing down hill in terms of personality, from all the manga i've read the MC here is one of the hardest to really cheer on. He is very hypocrite in the manga, saying things such as the prince being stupid for disregarding his position as a prince etc... meanwhile himself after damaging future of the woman lead who supposed to be the prince wife, he disregarded her emotions and trashed her away because he said its not really his responsibility and he wants the "true" story to happen in the game world he is isekai'd in. Yup hypocrite after taking away all the oppurtunities that should be given to the female lead he felt irresponsible and tossed her after that. ok enough with the MC, other thing i can say about the female leads are that they dont have anything going for them, female lead is being tossed arround everywhere and its hard to see her true emotions because the girl always blush at everything and for everyone. 2nd female lead kinda OK but because she is probably the only character that has a good development in personality so far. sorry but i also need to talk again about the MC, he also has a lot of powerup but it was used stupidly in the manga in a way that it felt like him having the powerup has no sense added in the story, even the ranks he gain he barely used it to do something, even after being promoted in a way that became history breaking for the kingdom for how fast he is being promoted he is still being kicked around by everyone. What's even the point of promoting the MC if almost everyone just do stupid shit to him, it felt like even if he is being promoted to higher rank he is still below. like wth right.

Overall didnt enjoyed most of what the author tried to do in the manga, if you're gonna read this and expects a good story, you'll be dissapointed. Also sorry for the long review that is also somewhat me just releasing awful shit about this manga, this is a first for me, most trash manga/manhua/manhwa i can tolerate and even suggest even though they are shit, but this is in another level. DONT READ.....